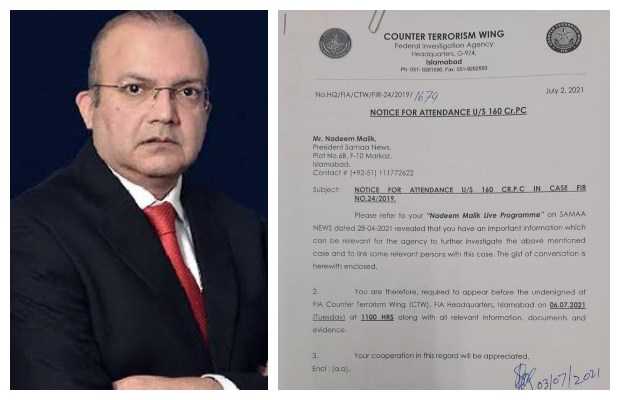 The senior journalist has been requested to appear at the FIA’s headquarters on July 6 with “all relevant information, documents, and evidence.”

According to the notice, the FIA has summoned the anchorperson under Section 160 of the Criminal Procedure Code.

“Please refer to your ‘Nadeem Malik Live Programme’ on Samaa News dated April 28, 2021, [that] revealed that you have important information which can be relevant for the agency to further investigate the above-mentioned case and to link some relevant persons with this case,” said the notice. 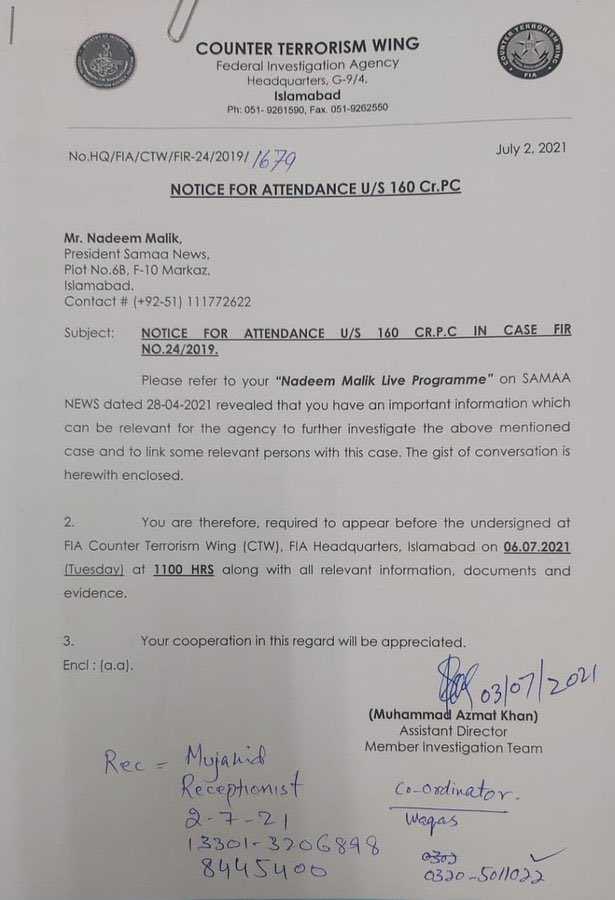 Pakistan Federal Union of Journalists (PFUJ) has taken serious notice of the issuance of attendance notice under section 160 of CRPC by the anti-terrorist wing of the Federal Investigation Agency (FIA).

PFUJ President Shahzada Zulfiqar and Secretary-General Nasir Zaidi condemned the behavior of FIA officials in a statement issued on Saturday.

“We want an immediate withdrawal of notice by the anti-terrorist wing of FIA and demand respect for journalists’ right to maintain the secrecy of his source of information,” the journalists’ leaders said.

“Nadeem Malik, president of a private TV channel, is a senior journalist and anchor commanding respect of his followers and viewers and is known for credible stories and television content,” the statement added.

The development has left the journalist community and politicians in strong reactions:

I Strongly condemn notice by FIA cybercrime to Mr Nadeem Malik who is one of the most professional journalists of Pakistan.

The notice served to @nadeemmalik, a credible and highly respected journalist, by FIA is highly condemnable and is yet more proof that this fascist regime won’t rest till the little remaining space for freedom of speech is eliminated. FIA must immediately withdraw this notice. pic.twitter.com/anzaY6t3NQ

FIA’s notice to Nadeem Malik, a reputable journalist, for personal appearance before the agency over his remarks on the notorious Arshad Malik case, is the latest example of unfolding fascism. Media is facing a total assault, whose origins I have consistently documented. pic.twitter.com/gIXWvsweFB

Senior anchor @nadeemmalik is an honourable journalist and the latest victim of FIA’s misadventures against media. #Condemnable

#JournalismIsNotACrime
Chief Justice Athar Minallah must take a Suo motu notice and summon FIA officials for their continued and consistent harassment of journalists.@nadeemmalik must not be harassed. Stop it.
👇 https://t.co/VUTdqp5JZp

Instead of investigating thoroughly about the case FIA sent an attendance notice to the senior Journalist and anchor person @nadeemmalik , as he had done his job greatly. we condemn the issuance notice by anti-terrorist wing of FIA.@BBhuttoZardari @MediaCellPPP pic.twitter.com/ElV4M4olsy

#PressFreedomUnderAttack This was predictable. @nadeemmalik was consistently reporting on issues in the public interest. https://t.co/Kg8URQWBsb

The senior journalist in his program ‘Nadeem Malik Live‘ on Samaa News dated April 28, 2021, said that he was informed by two individuals, part of the FIA team investigating Judge Malik, that “the other party” — declining to identify it — had found an old objectionable video of the judge.

He further went on the add that the unidentified persons had summoned the judge and told him that the video would “come out in pubic view” if he didn’t give a favorable decision in the Al-Azizia Steel Mills corruption reference.

FIA sends notice to prominent journalist @nadeemmalik over his news on judge Arshed Malik and how he was blackmailed pic.twitter.com/S6JgQHeiEu

tweet
Share on FacebookShare on TwitterShare on PinterestShare on Reddit
Saman SiddiquiJuly 4, 2021
the authorSaman Siddiqui
Saman Siddiqui, A freelance journalist with a Master’s Degree in Mass Communication and MS in Peace and Conflict Studies. Associated with the media industry since 2006. Experience in various capacities including Program Host, Researcher, News Producer, Documentary Making, Voice Over, Content Writing Copy Editing, and Blogging, and currently associated with OyeYeah since 2018, working as an Editor.
All posts bySaman Siddiqui