FIR finally has been lodged against the gun attack on PTI Chairman Imran Khan in Wazirabad by Punjab police.

As reported, an FIR was registered after IGP Faisal Shahkar in line with the directives of the SC ordered the Gujrat district police officer (DPO) to lodge the case so a copy of the FIR could be submitted to the apex court today.

He also conveyed to the DPO the decision of Chief Justice Umar Ata Bandial who had ordered him to register the case within 24 hours.

“The DPO had been conveyed to act as per law as per directions of the SC,” Mr. Shahkar said.

The FIR has been registered after four days after the attack carried out in Wazirabad under different sections, including attempt to murder and terrorism with sections 302, 324, 440, and Section 7 of the Anti-Terrorism Act 1997 included. 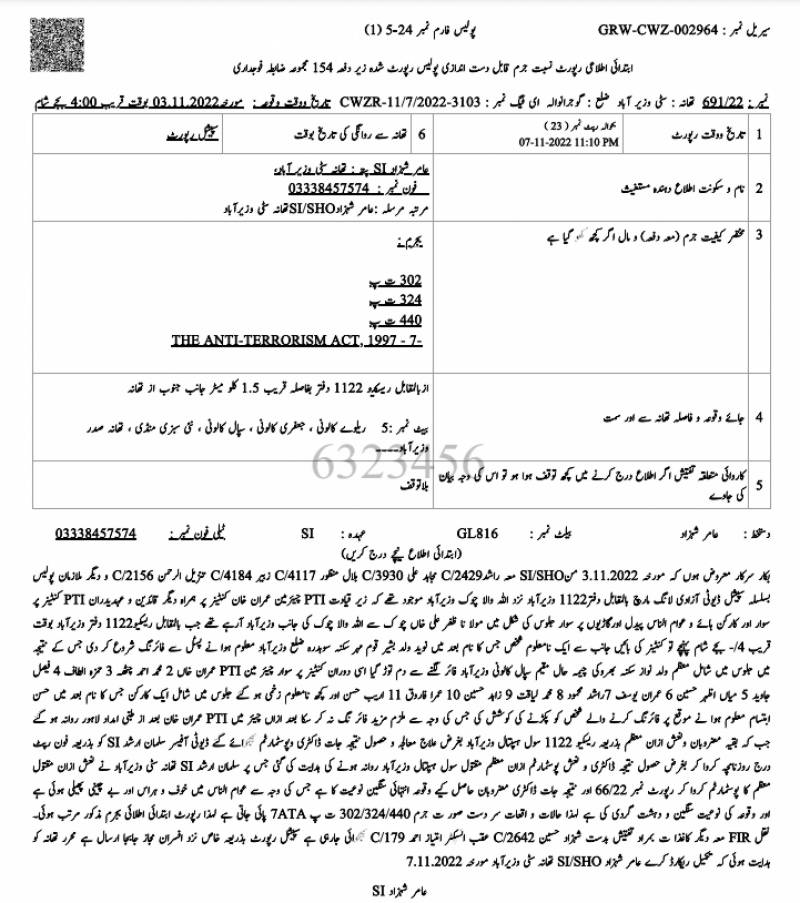 On the other hand, PTI leadership has rejected the FIR, terming it a “mockery of the law and the top court’s order.”

PTI leader Fawad Chaudhry said that the FIR is nothing more than a piece of paper if it doesn’t name the three accused nominated by Imran Khan.

The PTI will only accept an FIR if the names of the three high officials are on it, he added.

PTI leader Shireen Mazari in a tweet held the FIR as an “attempt at a complete cover-up by the three accused through the power of their positions and the state”.

The FIR registered in Wazirabad thana is sheer mockery of the law & SC order. An attempt at a complete cover up by the 3 accused thru the power of their positions & the State. Seems regime change conspirators hellbent on destroying Pak totally for their own ends. #FIR_Rejected

This FIR is a clear mockery of the justice system. Under what precedent has FIR been registered by police as a record of THEIR version? The victim, former PM @ImranKhanPTI has clearly indicated 3 names & chosen zubair Niazi as complainant. Unaccep on all accounts#FIR_Rejected pic.twitter.com/mDGXrDuzSZ

FIR registered is rejected!! This FIR is not even worth the paper its written on. Mockery of Justice!! #FIR_Rejected