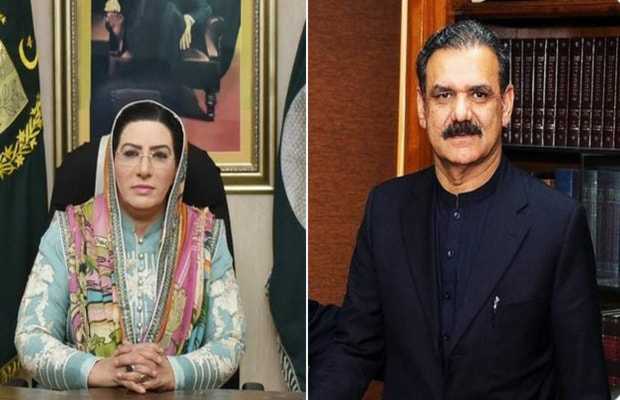 Dr. Firdous Ashiq Awan has been sacked from the post of special assistant on information and broadcasting to the Prime Minister Imran Khan.

PM Imran Khan on Monday appointed Asim Bajwa as a new special assistant for information, who is also serving as the chairman of the China-Pakistan Economic Corridor Authority (CPECA), appointed by the govt. on Nov 27, 2019.

As per the notification issued by the Cabinet Division, “The prime minister … has been pleased to appoint Lt Gen (Rtd) Asim Saleem Bajwa as special assistant to the prime minister on information and broadcasting, in [an] honorary capacity, with immediate effect”.

And the other notification intimidates that, “The prime minister has been pleased to remove Dr. Firdous Ashiq Awan from the office of special assistant to the prime minister on information and broadcasting, with immediate effect.”

As per the emerging news, Firdous Ashiq lost a special assistant portfolio over corruption charges.

Allegations surfacing against Firdous Ashiq Awan claim that she had tried to take a 10% commission on the government’s advertisement budget. She also allegedly hired more employees on the quota of national television. Adding more to it, she had also taken 3 vehicles from the government without permission.
According to a news source, Firdous Ashiq was summoned to PM Office where PM’s Principal Secretary Azam Khan confronted her with the findings of the inquiry and directed her to step down from the position.
Source says that the former SAPM was also informed that she had violated the rules of business by acquiring additional vehicles and employees without authorisation.
Meanwhile, on late Monday night, Firqous Ashq Awan took to twitter thanking Prime Minister Imran Khan for trusting her.
She said it was his prerogative to decide which member of his team will serve on what position. “I respect his decision,” she added.

She also refuted news reports claiming she was removed from her office due to alleged corruption, terming them “concocted” and “baseless”.

Ever since the notification was issued, #FirdousAsiqAwan hashtag is trending on top of the Pakistani Twitter. The former PM’s aide is the latest

I am personally happy about #FirdousAshiqAwan being replaced. She was way too outspoken and non serious person like fawad chaudry 😒
Congrats to ex DGISPR Asim Bajwa. He knows how to stand tall against enemies 😎

Every time a senior figure from the government is removed, the entire country celebrates. That alone says a lot about this government.#FirdousAshiqAwan

Congratulations to you Asim Saleem Bajwa on getting a new post. You are our hero 💚
And as DJ ISPR you have done a lot for the country..#FirdousAshiqAwan pic.twitter.com/1d431TGa0D

Finally a long awaited decision by PM @ImranKhanPTI! Congratulations and best of luck to @shiblifaraz and Gen. @AsimBajwaISPR for their new roles as Information Minister and SAPM respectively
#FirdousAshiqAwan pic.twitter.com/aVJAdjJ9hi

Can’t say I’ll miss #FirdousAshiqAwan, but #AsimBajwa in her place?! At least they’re officially admitting who the main ‘advisor’ to the government actually is.

Information ministry is a state institution & #FirdousAshiqAwan was using it for political point scoring.#AsimSaleemBajwa’s appointment will make flow of info professional & for benefit of the state, while Sen. Shibli Faraz secures govt’s political interests.

tweet
Share on FacebookShare on TwitterShare on PinterestShare on Reddit
Saman SiddiquiApril 27, 2020
the authorSaman Siddiqui
Saman Siddiqui, A freelance journalist with a Master’s Degree in Mass Communication and MS in Peace and Conflict Studies. Associated with the media industry since 2006. Experience in various capacities including Program Host, Researcher, News Producer, Documentary Making, Voice Over, Content Writing Copy Editing, and Blogging, and currently associated with OyeYeah since 2018, working as an Editor.
All posts bySaman Siddiqui