Karachi: 15 labourers killed as fire erupts at a chemical factory in Korangi area

13 fire tenders and a snorkel were being used to put out the blaze. 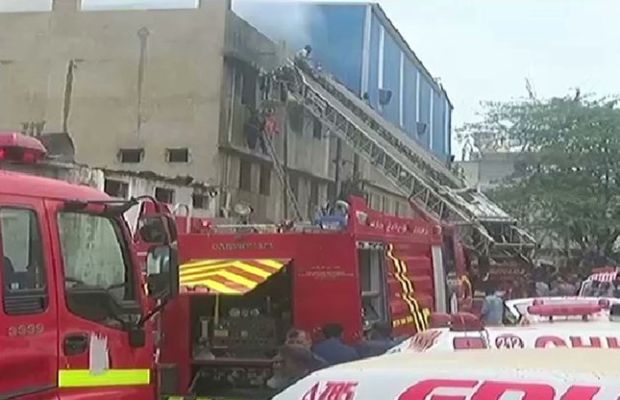 Labourers killed at a chemical factory!!

15 labourers were killed as fire erupts at a chemical factory in Karachi’s Korangi area on Friday.

The fire brigade team has declared the fire a third-degree blaze because of the toxic chemical inside the factory.

As being reported, twenty-one people were working on the first floor of the factory where the blaze erupted.

According to the residents of the area, the fire erupted around 10 am on Friday at the chemical factory near Korangi Mehran Town Sector B-6.

The rescue operation is underway at the site. The fire brigade crew is facing difficulties in the rescue operation because of the narrow lanes leading to the factory. While the Karachi Water and Sewage board has imposed an emergency at the Landhi and Sherpao hydrants.

Chief fire officer, Mubeen Ahmed, said that the blaze erupted on the first floor of the building. “We are using snorkels and cranes to reach the second floor.

“If the door was open, it would have been easier to rescue the labourers,” he added.

Murtaza Wahab said that the police have been instructed to prepare an initial investigation report on how the fire started.

“We are also seeing if there were proper emergency exits and fire extinguishers in the factory,” Wahab added.

Sindh Chief Minister Murad Ali Shah took notice of the incident and has sought a report from the commissioner Karachi and labour department on how the fire broke out.

The Sindh CM has asked the concerned authorities to explain how the incident took place, what precautionary and safety arrangements were taken in the factory and how so many lives were lost.

Sindh Chief Minister Murad Ali Shah has promised free medical treatment for people injured in the fire. “We will provide all aid to the families of the deceased,” Murtaza Wahab said.