At least 12 people have injured in the inferno, reports said. 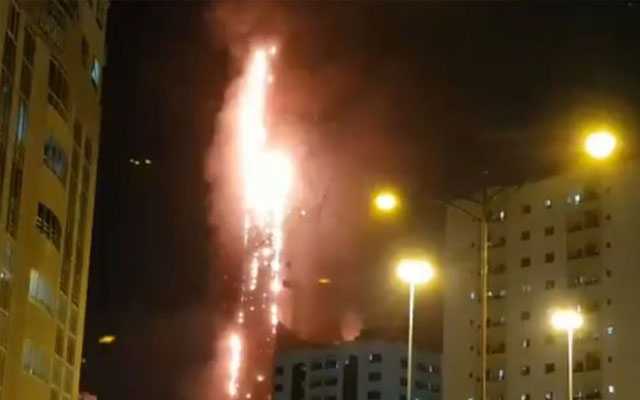 A massive fire raged through at a residential building in the emirate of Sharjah, UAE late Tuesday night.

According to the details, 12 people were injured in the blaze at the 48-floor building, named Abbco Tower located in Sharjah’s Al Nahda area, Sharjah government’s media office said.

Authorities had evacuated residents of the building and that of neighbouring ones as soon as the blaze was reported, according to the Gulf News.

The emergency teams tackled the blaze and managed to bring it under control two hours after civil defence received the first fire alert. Personnel from Mina and Al Nahda fire stations attended the scene, while the Sharjah Police Air Wing was also called into action.

National Ambulance dispatched five vehicles to the scene, according to Gulf News.

Residents from at least five buildings nearby were also led to safety, local media reported.

Residents from the Abbco Tower were provided within the housing by the Emirates Red Crescent, reports said.

The local media of UAE reported, quoting eyewitnesses, that the fire erupted in the building located next to the Taj Bangalore restaurant. The Civil Defence teams were alerted shortly after 9 p.m. and rushed to the site of the incident, making sure the building had been evacuated.

Videos emerged from the site of the incident showed flames engulfing the full height of the building as debris crashed on to cars below, netizens on the micro-blogging website, Twitter also shared the tragic scene.

It took several drones, at least a dozen fire trucks, and scores of firefighters but authorities finally put out a massive #fire that ravaged the 40-floor Abbco Tower in #AlNahda #Sharjah. Cooling ops underway
Video: Fire breaks out in Sharjah building https://t.co/8f4ND1H1z8 pic.twitter.com/gEDRRtOlV0

Massive fire at a 50 storey residential tower – Abbco, at Al Nahda, Sharjah. Said most of the residents are Indians #Dubai #sharjah pic.twitter.com/l0LL77sc3s

Officials are yet to confirm the cause of the fire. The initial reports say the fire broke out on the 10th floor of the Abbco Tower at 9.04pm, moving up quickly due to cladding.