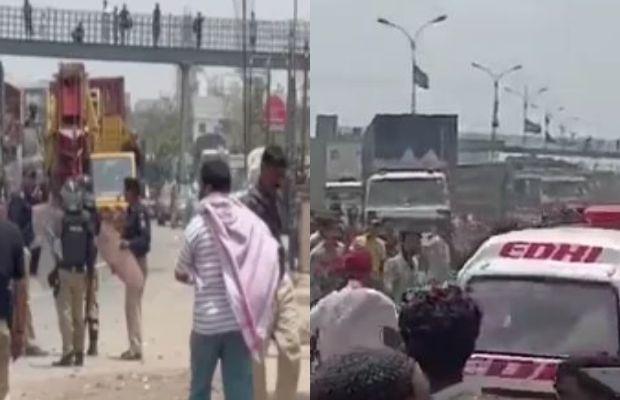 Flustered Karachiites took to the streets over prolonged load-shedding on Tuesday.


Protests have erupted in Karachi over the worst load shedding in scorching summer.
The protest against power outages on the second day at Karachi’s Mauripur Road, which links the Karachi Port Trust (KPT) and SITE industrial areas.

The protestors burnt tyres and blocked the road for traffic
Later in the day, the police baton-charged the protesters, who have been protesting since last night,  after they refused to vacate the main road.

According to unconfirmed sources, a 60-year-old woman dies on the spot amid police tear gas shelling.

The situation of protest is being shared on social media as well:

Senior Superintendent of Police (SSP) Asif Bughio said that the residents dispersed for a while after the police action but resumed the protest shortly after.

“Electricity in several areas of Lyari, particularly the one adjacent to Mauripur road, has been suspended since 4 pm yesterday, he added.

“Due to prolonged disruption in the power supply, hundreds of residents blocked the road for hours,” he said, adding that the police tried to negotiate with them but they attacked the law enforcers with stones.

In the Gadap Town area, the load-shedding time has gone up to 18 hours in a day, while Shah Faisal Colony, Malir, Surjani Town, Gulistan-e-Jauhar, areas around Jahangir Road, Sultanabad, and Kala Pul, among some other areas, are reported being facing power outages of 14 hours or more.

Separate protests against water shortages were also reported from other parts of the city early on Tuesday morning as well.

According to traffic police, the residents of Liaquatabad’s Dak Khana, Shah Faisal Colony 2, and Kala Pul took to the streets.