Game of Thrones: HBO responds to the coffee cup blunder in S8-E4

If you haven't watched episode 4 ‘The Last of the Starks, of Game of Thrones season 8 yet, here's a spoiler that can ruin the episode for you. 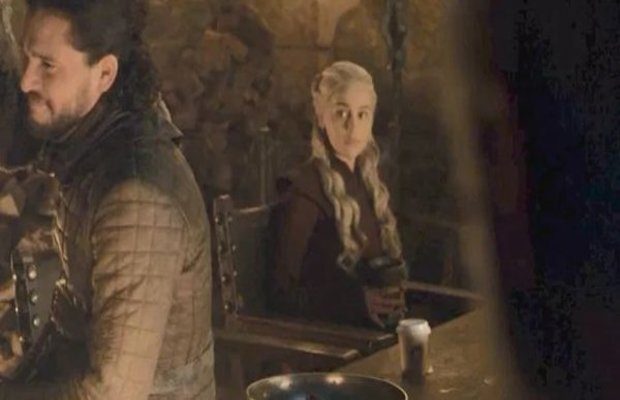 HBO has responded to the Coffee Cup Blunder in S8-E4, admitting that it was a mistake. In a press release

HBO stated, “The latte that appeared in the episode was a mistake. Daenerys had ordered an herbal tea”, making fun of itself for the apparent mistake.

According to the Variety, in an email GOT’s art director Hauke Richter said “Things can get forgotten on set. The coffee cup error has been] so blown out of proportion [because] it has not happened with ‘Thrones’ so far.”

“Game of Thrones” season 8 episode 4 included a scene, where a disposable coffee cup resembling famous coffee brand, was visible on the table visible on a table in front of Daenerys Targaryen (Emilia Clarke), just before the 17:40 mark.

The cup seems to appear in the scene for nearly 2 seconds, but not a single thing goes unnoticed form eagle-eyed GOT fans. As soon as the episode ended #Starkbucks was on Twitter’s top 10 trending topics.

Here are some reactions to the coffee-cup blunder in the latest episode doing rounds on social media.

You're telling me they had TWO YEARS to put together a decent show and they couldn't even spot the goddamn Starbucks cup in Winterfell??!?! #GameOfThrones pic.twitter.com/8opg7nyydv

So this is where we're at now! A Starbucks cup! #GameofThrones pic.twitter.com/dhWXyDo15w

ooooh i get it now they all have STARBUCKS names pic.twitter.com/SSj5skShLo

my favorite show in the entire world forgot a STARBUCKS COFFEE CUP ON THE TABLE WHILE FILMING pic.twitter.com/60z3pOCfg9

I thought this might be a joke to make us all rewatch that scene, but nope, it’s real. I took a picture too. It’s at 17:49 and it’s a pretty unmistakable coffee cup. https://t.co/uc8I0zoXiL

tweet
Share on FacebookShare on TwitterShare on PinterestShare on Reddit
Saman SiddiquiMay 7, 2019
the authorSaman Siddiqui
Saman Siddiqui, A freelance journalist with a Master’s Degree in Mass Communication and MS in Peace and Conflict Studies. Associated with the media industry since 2006. Experience in various capacities including Program Host, Researcher, News Producer, Documentary Making, Voice Over, Content Writing Copy Editing, and Blogging, and currently associated with OyeYeah since 2018, working as an Editor.
All posts bySaman Siddiqui