A young girl identified as Dua Nisar Mangi was kidnapped at gunpoint from Karachi’s DHA Bukhari Commercial Area on Saturday night, while her male friend named Haris, who accompanied her was shot at the incident.

The seriously wounded boy was rushed to nearby National Medical Center but later was shifted to the Aga Khan University Hospital.

According to the sources, Haris Fateh was shot in the neck is admitted in hospital in critical condition.

Both of them were roaming around in the area after drinking tea from a hotel when the kidnappers suddenly attacked them and opened fire at Hari’s, and the unidentified kidnappers took away the girl in a car reported to be grey in colour and its model was four years old.

First Investigation report, FIR has been lodged at the Darakhshan Police Station under sections of murder attempt and kidnapping.

The FIR states that Haris, the friend of the abducted girl, told their family that he was going out to meet his friends.

Reportedly, a special investigation team of police has been tasked to recover an abducted girl. The team is working over to trace out the car in which kidnappers took away the girl.

Reportedly, Police have obtained CCTV footage of the incident and have been interrogating a rickshaw driver, who is claimed to have seen the incident.

As being reported the Police also looking into recording the statements of the families and friends for any possible clues about the abductors.

Meanwhile, the immediate family of the abducted girl and others have reached out through social media seeking help to find missing girl identified as Dua Nisar Mangi 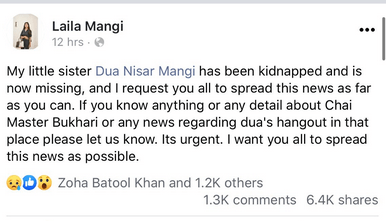 My cousin, Dua Nisar Mangi, has bn kidnapped/missing & her friend has been shot and is in critical condition.The incident occurred near chai master bukhari Defence phase 7.
Please spread the word and contact me if you come across any information.
This is urgent!!!

My friend @HasnainRahul ‘s cousin Dua Nisar Mangi has been kidnapped in Karachi and is now missing. The incident occurred near Chai Master Bukhari last night.
Please keep an eye out, retweet this, and inform @HasnainRahul if you have any leads. pic.twitter.com/ojFpQrHRCU

IMPORTANT:
Dua Nisar Mangi has been kidnapped/missing and her friend has been shot and is in critical condition. The incident occurred near chai master bukhari.
Please RT and contact @HasnainRahul if you come across any information.
THIS IS URGENT!