Frere Hall in Karachi was built to serve as a town hall in 1865. 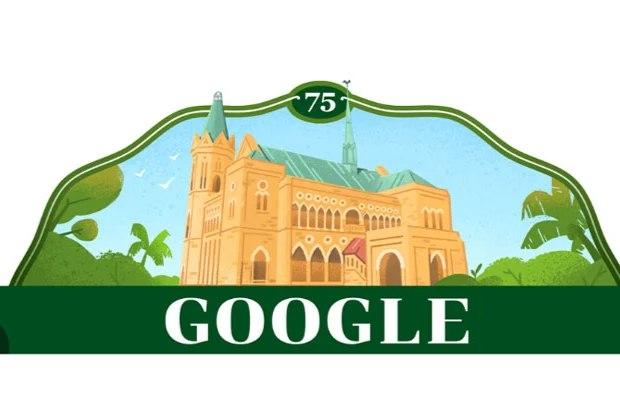 Marking the independence day celebrations of Pakistan, Google Doodle briefed about choosing the iconic Frere Hall building, Karachi, said, “Today’s artwork features Frere Hall in Karachi, which was built to serve as a town hall in 1865.”

“The historic building is now a popular tourist destination that houses Karachi’s largest library, the Liaquat National Library, with a collection of more than 70,000 books and manuscripts.”

“In 1980, famous Pakistani artist Sadequain was chosen to decorate the hall’s ceilings,” it added.

“On this day in 1947, Pakistan gained independence and became a sovereign nation. This public holiday commemorates the deeds and legacies of Pakistan’s founders,” reads the Google Doodle message.

“Celebrations for the country’s Independence Day start with a 31-gun salute in the federal capital, Islamabad, followed by flag-hoisting ceremonies at presidential and parliament buildings,” it added.

“Many speeches on national progress are made by political leaders and televised live to the public.”

tweet
Share on FacebookShare on TwitterShare on PinterestShare on Reddit
Saman SiddiquiAugust 14, 2022
the authorSaman Siddiqui
Saman Siddiqui, A freelance journalist with a Master’s Degree in Mass Communication and MS in Peace and Conflict Studies. Associated with the media industry since 2006. Experience in various capacities including Program Host, Researcher, News Producer, Documentary Making, Voice Over, Content Writing Copy Editing, and Blogging, and currently associated with OyeYeah since 2018, working as an Editor.
All posts bySaman Siddiqui