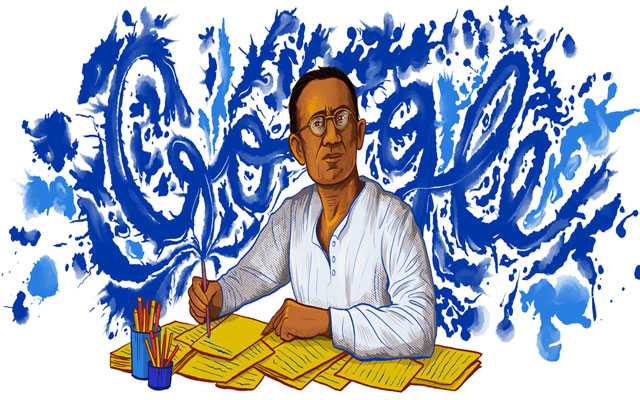 Today world have marked the 108th birthday of legendary Pakistani author, journalist, playwright, and screenwriter Saadat Hasan Manto, and Google dedicated a doodle for their homepage in his honour.

Born on May 11,1912 in Samrala in the British Indian state of Punjab, Saadat Hasan Manto is known for his candid and often provocative narratives, Manto has been widely credited as one of South Asia’s most talented modernist fiction writers.

The doodle,illustrated by Lahore-based guest artist Shehzil Malik features Manto in a white traditional Kurta while sitting and writing.

Manto came of age during an era of significant civil unrest amid the growing movement to liberate India from British rule. Despite early troubles in school, he discovered a passion for literature, and by his early 20’s, he had published his own translations of European classics in his native Urdu tongue. He soon progressed to original fiction, channeling his iconoclastic spirit into short stories like the aptly titled “Revolutionary” (“Inqilab Pasand”, 1935).

By the 1940s, Manto’s Urdu literature was a tour de force. Through his unfiltered exploration of marginalized characters and social taboos, Manto charted controversial territory that few writers dared to explore.

The partitioning of India in 1947 prompted Manto’s migration to the newly formed Pakistan, and he is perhaps best remembered for his work examining this tumultuous historical moment.

Manto published 22 collections of short stories throughout his prolific career, but he wasn’t limited to the medium; he also wrote a novel, three collections of essays, over 100 radio plays, and more than 15 film scripts.