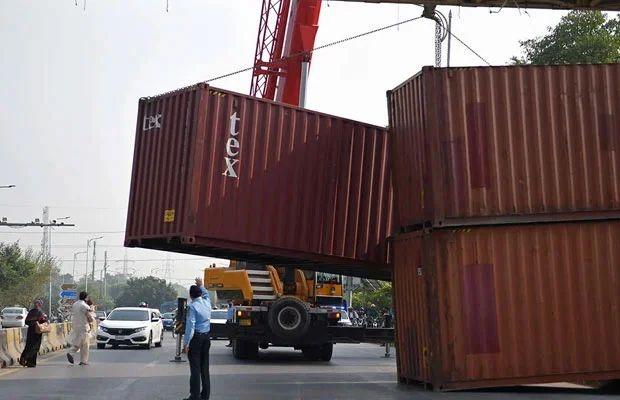 The government is acting to stop PTI’s long march to Islamabad!

Interior Minister Rana Sanaullah in a presser on Tuesday announced that the federal cabinet had decided it would not allow the PTI to hold its planned long march to the capital, due to take place on May 25 (tomorrow).

He said the government would not allow the PTI to spread “chaos and disorder” in the guise of the march.

“They will be stopped so they cannot propagate their misleading agenda,” Interior Minister Rana Sanaulla said.

“These people (PTI) have moved from abuses to bullets. A police constable was killed in Lahore,” he added.

According to the source, shortly after the press conference, Interior Minister Rana Sanaullah summoned the Pakistan Army for the security of the Red Zone in Islamabad.

The federal government, and the provincial governments of Sindh and Punjab, have imposed Section 144  following the recent terrorist activities and possible threats.

On the other hand, the federal capital is likely to be cut off from the rest of the country on Wednesday as the government continues its efforts to stop PTI’s Long March.

Faizabad, Bhara Kahu, Rawat, and Golra areas are being sealed by putting containers and deployment of police.

Section 144 has also been imposed in the federal capital for two months.

According to a notification, the restrictions have been extended up to one kilometer of the Red Zone.

According to Metrobus management, the Metro bus service has been halted at the request of Rawalpindi and the Islamabad administration.

Metro bus service is likely to remain closed till the 26th.

Sources said that further decisions on the closure of Metro service would be taken after considering the situation.

In view of the long march, the administration has also decided to seal Faizabad Interchange.

According to sources, additional personnel of Rawalpindi and Islamabad police has been deployed in Faizabad.

Faizabad will be completely sealed from tonight.

The Punjab government has decided to shut down the mobile service in Lahore tomorrow.

the mobile service in different parts of Lahore city has been shut down since Wednesday morning, claims local media.

As per the news source, the mobile service will be closed on all the entry and exit routes of the city including Thokar Niaz Baig, and Defense.

tweet
Share on FacebookShare on TwitterShare on PinterestShare on Reddit
Saman SiddiquiMay 24, 2022
the authorSaman Siddiqui
Saman Siddiqui, A freelance journalist with a Master’s Degree in Mass Communication and MS in Peace and Conflict Studies. Associated with the media industry since 2006. Experience in various capacities including Program Host, Researcher, News Producer, Documentary Making, Voice Over, Content Writing Copy Editing, and Blogging, and currently associated with OyeYeah since 2018, working as an Editor.
All posts bySaman Siddiqui