Govt. and Opposition flex their muscles in today’s joint session of Parliament 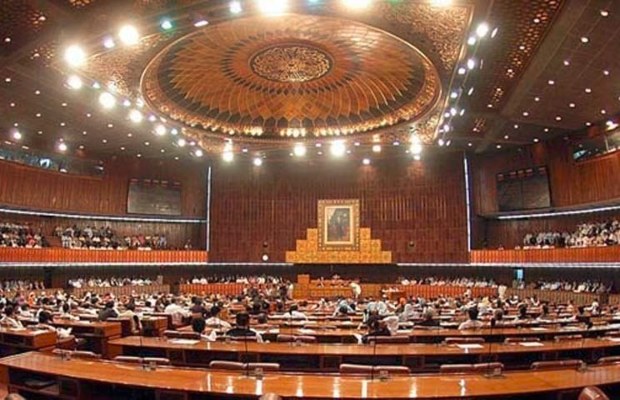 Govt. and Opposition flex their muscles in today’s joint session of Parliament!

Government is to table 22 bills in Parliament’s joint session currently underway in Islamabad.

Being chaired by Speaker Asad Qaiser, the joint session’s agenda includes the electoral reforms bill and the bill for the right of overseas Pakistanis to vote.

The joint session had been summoned by President Arif Alvi and was initially expected to start at 12 pm.

Other members of the House, including Prime Minister Imran Khan, Leader of the Opposition Shehbaz Sharif, former President Asif Ali Zardari, and PPP Chairman Bilawal Bhutto Zardari are present for the joint sitting of Parliament.

Awan said that the Opposition has objections to Agenda No 2 of the Election Amendment Bill 2021.

As soon as the session started that National Assembly Speaker Asad Qaiser handed over the microphone to Parliamentary Affairs Adviser Babar Awan, the Opposition started making noise, after which the Speaker allowed the Leader of the Opposition Shehbaz Sharif to speak.

Awan requested the speaker to postpone the bill for electronic voting machines. saying the Opposition wanted to talk to him [the Speaker] over this bill, so it should be delayed.

“The bill has been discussed with you and also in the Senate. The bill should be postponed for further discussion,” Awan said.

The speaker deferred the bill for electronic voting machines.

As the government eyes passing more than two dozen bills with the help of its allied parties, the joint opposition on the other hand has vowed to foil the treasury’s attempt to get the “black laws” passed at all costs.

The bills to be taken up for passage were referred to the joint sitting by the National Assembly after they were not okayed within the stipulated 90 days.

It was decided at the meeting of the Opposition Alliance held ahead of the Parliament session that if the government enacted legislation unilaterally and forcefully, it would be challenged in court.

Leader of the opposition Shahbaz Sharif and Bilawal Bhutto agreed that the anti-people legislation would be strongly opposed.

The meeting also decided that there would be protests against such legislation inside and outside the parliament.

Addressing a press conference with Shahbaz Sharif after the meeting, Bilawal Bhutto Zardari said that the government was facing one defeat after another due to the unification of the opposition.

Bilawal Bhutto Zardari said that the manner in which the government and its allies have been exposed before the nation.

Sources said that the united opposition had given the task to a three-member committee comprising Farooq Naik, Azam Nazir Tarar, and Kamran Murtaza.