It was just a few days ago when a ten-year-old boy in Mansehra was sexually assaulted by a Madrassa teacher. 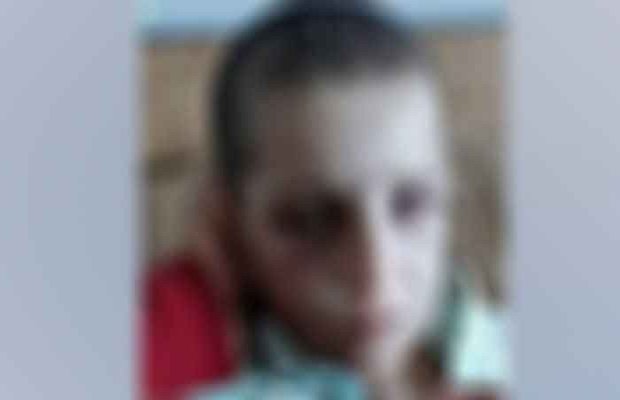 The child abuse cases seem to be on the rise in Pakistan, particularly 2019 saw some horrendous cases of child abuse, rape and child molestation.

The citizens have been urging authorities to make an example out of such perpetrators who mistreat children.

It was just a few days ago when a ten-year-old boy in Mansehra was sexually assaulted by a Madrassa teacher.

Reportedly, the child was hospitalized after suffering from serious injuries. However, the KPK police on Sunday arrested Qari Shamsuddin in connection with the case.

While responding to Mahira’s Tweet, Dr. Shireen Mazari has shared a detailed account on Twitter. Federal Minister for Human Rights also revealed that the Govt. is preparing a holistic policy on child abuse under PM’s directive.

While Taking it to social media, in a series of tweets Shireen Mazari wrote:

“We have to enforce the laws which we are doing & these monsters have been caught. But the real issue is to prevent these horrendous crimes which require awareness & changes in mindsets. We have started these progs for the first time esp amongst parents, children, teachers, etc.

Our Zainab Alert Bill has finally been passed by the Standing Committee & should be tabled in NA and then in Senate. Much as we would like to simply catch these monsters & publicly punish them, govt. has to go according to the law. But equally, imp we need to PREVENT crime of child abuse”. 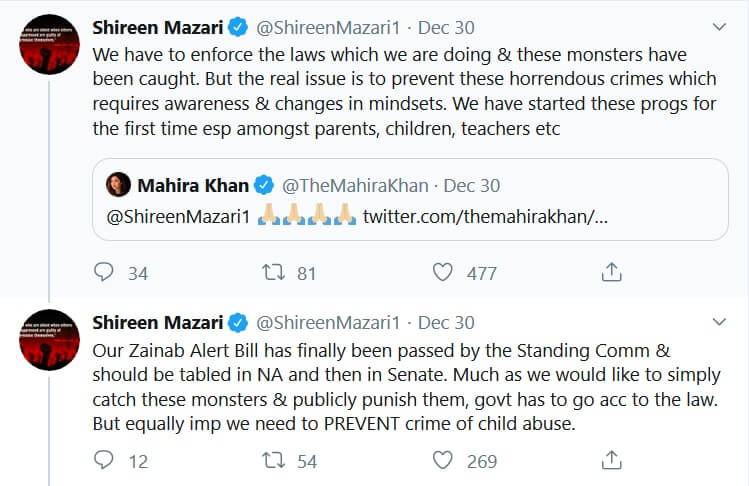 “And that requires society to unite and change mindsets at all levels incl recognizing we have these monsters amongst us. We are now preparing a holistic policy on child abuse under PM’s directive and within two weeks it should be ready with all stakeholders being taken on board”, Mazari concluded. 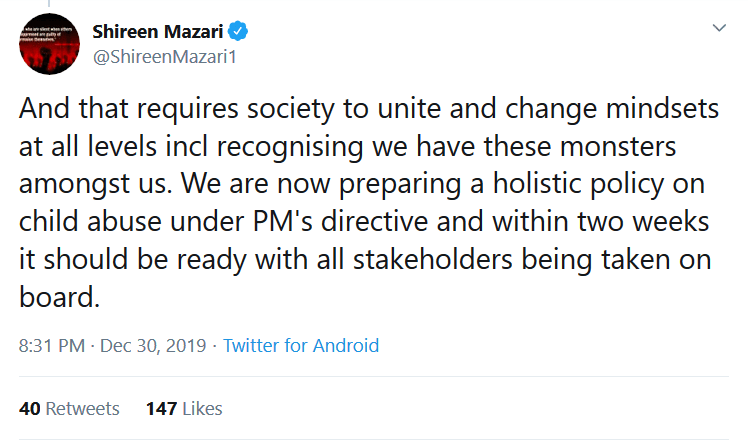 Mahira Khan is thankful to the minister for her response, and also requests for more swift action.

Thank you for responding 🙏🏼Also a request – more swift action should be taken. More noise should be made about this. A loud and clear msg should go out to these predators. https://t.co/FQ4NJXqgyw