Over a million pilgrims, including more than 84,000 Pakistanis performed the Rukn-e-Azam of the Hajj, “Waqoof-e-Arafat”. 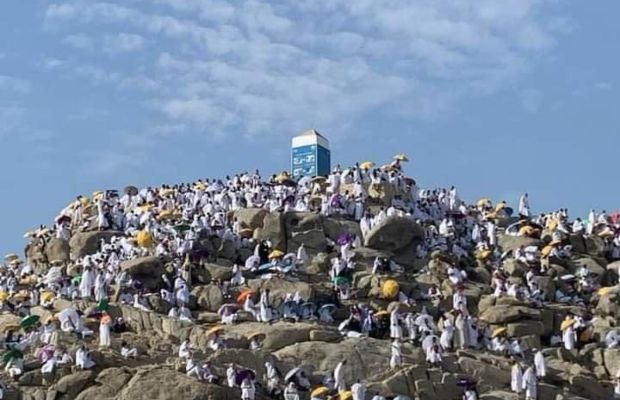 Muslim pilgrims pray at Mount Arafat on Friday, where they remain until nightfall in deep contemplation and worship for the Hajj 2022.

Friday saw the lucky pilgrims stand shoulder to shoulder, feet to feet for the emotional day of supplication in the desert valley of Arafat.

Over a million pilgrims, including more than 84,000 Pakistanis, proceeded to the plains of Arafat today to performed the Rukn-e-Azam of the Hajj, “Waqoof-e-Arafat”.

The same place where Prophet Muhammad delivered his final sermon, calling for equality and unity among Muslims, fourteen hundred years ago.

Pilgrims offered Zuhr and Asr prayers combined together and will stay at Arafat the whole day in prayers.

Pilgrims will leave for Muzdalifah after the sun set where they will offer both Maghrib and Isha prayers together and spend the whole night under the open sky.

After sunset, they will leave for Muzdalifah where they will offer both Maghrib and Isha prayers together and spend the whole night under the open sky.

This year’s Hajj marks the largest since the virus struck, having the attendance of one million worshippers which remains less than half of the pre-pandemic influx.

Saudi Arabia allowed just one million foreign and domestic pilgrims this year, who have been fully vaccinated against coronavirus, tested negative for Covid19, and are between 18 and 65 years old.

While the worshippers this year have faced an added challenge the scorching sun and temperatures rising to 42°C.