Hamza Shehbaz elected Chief Minister of Punjab amid all the ruckus

Hamza Shehbaz elected CM with 197 votes; His rival Pervaiz Elahi did not receive any votes as PML-Q, PTI boycott polls 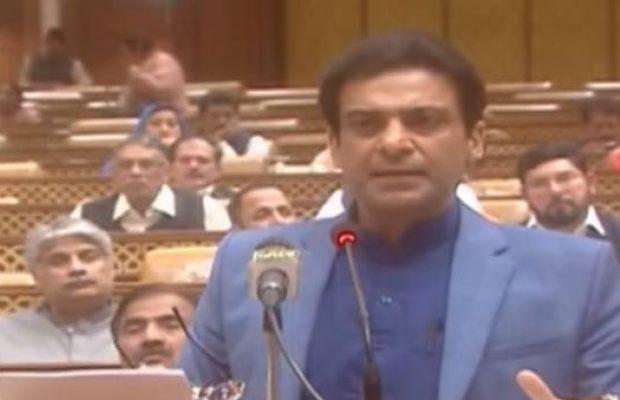 Hamza Shehbaz has been elected chief minister of Punjab amid all the ruckus on Saturday.

PML-N leader Hamza Shehbaz was elected as the new chief minister with 197 votes.

While Pervaiz Elahi did not receive any votes as his party PML-Q and PTI had boycotted the polls.

Hamza Shehbaz has become the 21st Chief Minister of the province.

Shehbaz while delivering his first speech in the Punjab Assembly made a commitment to the people of the province to solve their problems of people on a priority basis.

Hamza Shehbaz said that democratic and constitutional traditions were violated but he wants to take opposition with him to solve the problems of the people.

He added that everyone must work together for the development of the country. He said the fun time has ended in the country and democracy will be strong now.

He announced that now the faces of the enemies of the democracy would be exposed now.

He said today the PTI not only attacked the Deputy Speaker but on the sanctity of the Punjab Assembly.

He paid tribute to Deputy Speaker Punjab Assembly Dost Mazari for paying his constitutional duty to conduct the elections for the chief ministership obeying the orders of the court.

Saturday’s crucial Punjab assembly session was scheduled to start at 11:30 am. However, the session was delayed as government lawmakers belonging to PTI and PML-Q resorted to violence.

The lawmakers of the ruling party threw “lotas” at Deputy Speaker Mazari and attacked him and also manhandled him despite the presence of security guards.

The deputy speaker had to leave the assembly hall after which the session was delayed.

Ahead of the vote, three PTI members of the Punjab Assembly were arrested for attacking Deputy Speaker Dost Mohammad Mazari as the party boycotted the session to elect the new chief minister.

The day saw another embarrassing moment prior to the resumption of the session.

Elahi became a target of the violence in the assembly that left him injured. Video emerged showing Elahi being given oxygen while his right forearm was wrapped in a bandage having spotting of medicine on it.

He alleged that PML-N MPA Rana Mashood broke his hand.

“During his (Shehbaz’s) exile, I took care of Hamza [Shehbaz] but today he showed his reality,” he said.

“This is Sharif’s democracy. They have crossed the limits today.”

Usman Buzdar tells Pervaiz Elahi ‘we didn’t know what was happening to you’ pic.twitter.com/X0vRSPRruz

tweet
Share on FacebookShare on TwitterShare on PinterestShare on Reddit
Saman SiddiquiApril 16, 2022
the authorSaman Siddiqui
Saman Siddiqui, A freelance journalist with a Master’s Degree in Mass Communication and MS in Peace and Conflict Studies. Associated with the media industry since 2006. Experience in various capacities including Program Host, Researcher, News Producer, Documentary Making, Voice Over, Content Writing Copy Editing, and Blogging, and currently associated with OyeYeah since 2018, working as an Editor.
All posts bySaman Siddiqui