Many opinions are being shared on the latest episode of national embarrassment. 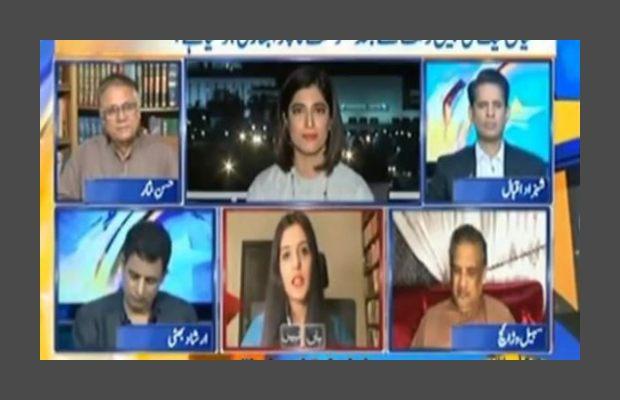 Senior journalist’s behavior has left social media in an uproar once again.

The senior journalist was on the guest panel appearing on Geo New’s live show Report Card on Monday evening.

The latest episode was based on following the political situation in the country amid the No-Confidence Motion against PM Imran Khan.

While sharing opinions regarding the democracy in the country, Hassan Nisar lost his cool and started personal verbal attacks on the female panelist Reema Omer.

It was an obvious mistake from the pannel producer of the program as well as the program anchor who did not cut both the guests and let the degrading comments go on air during the live show.

Journalist Hasan Nisar had shared misogamist comments during the same live show for Reema Omer back in 2020 as well.

The clip is now doing rounds on the Twitter timeline with many opinions being shared on the latest episode of national embarrassment.

I strongly condemn this shitty behavior of so called journalist Hassan Nisar. Geo tv must take action against him. More power to you Reema Omer Sahiba. https://t.co/Ty4MJhHAcZ

I hope Report Card pays enough so Reema can avail therapy. Sitting in a mindless shouting contest between Hassan Nisar & Irshad Bhatti can have serious effects on one’s well being.

I strongly condemn Hassan Nisar’s narcissist behaviour towards @reema_omer and other journalists who disagree with him. @GeoReportCard should not invite such participant who do not respect other’s freedom of speech and disrespect them when it comes to conflict of opinion.

Hasan Nisar should be told to take a hike. Bat tameez aadmi. Doesn't know how to behave.

I want to know what Hassan Nisar was doing when he was Reema’s age. His contribution to pakistan’ journalism and politics pales in comparison to Reema’s contribution. May all girls grow up to be like Reema. https://t.co/yuxWgxX2P3

Why @geonews_urdu has Hasan Nisar, and why he is allowed to yell at @reema_omer – @FarooqAleena honestly, do better. Why is he allowed to be so abusive to her?

Hassan Nisar is a misogynist who should be banned for television. Absolute inappropriate behavior towards @reema_omer yet again !!! Most condemnable