No one seems to be impressed with this publicity stunt! 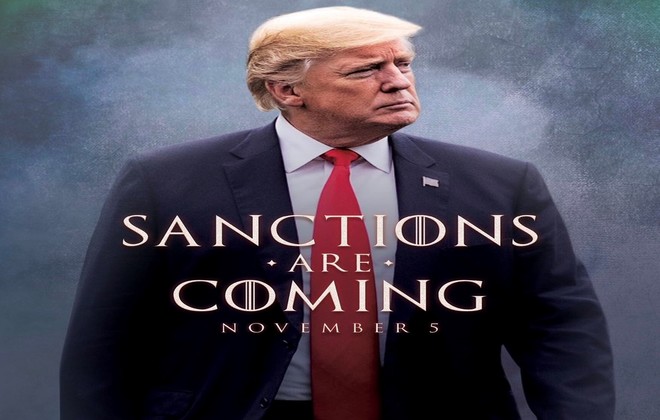 It seems like U.S President Donald Trump‘s social media team is a fan of HBO’s world famous Game of Thrones series. Or being impressed by its popularity they decided to opt for a poster based on GoT’s title style. Stealing the title phrase “Winter is Coming”, making slogan for POTUS campaign “Sanctions are Coming”.

The sanctions are being imposed by U.S president against Iran back in effect which were suspended in May as, Trump pulled out of the deal made by the Obama administration. November 5th date was added below the tag line to indicate the sanctions application date.

HBO was not pleased at all with this publicity stunt, as the company tweeted from its official Twitter account: “How do you say trademark misuse in Dothraki?”

GoT followers know The Dothraki are a powerful violent tribe in Game of Thrones!

How do you say trademark misuse in Dothraki?

The POTUS tweet received a massive backlash on the social media. Many people were quick to respond to his tweet, including Game of Thrones stars.

Sophie Turner replying to his tweet only wrote “EW”, showing her disgust for it.

Maisie Williams reply was “Not Today”.

And there started a thread of response to POTUS tweet, some of those are hilarious.

Iranians people will stand against you pic.twitter.com/4HjhIhPEPy

Wow! You are supposed to be the leader of the free world! This is your leadership? Seriously! With spreading fear just like Night walkers?#Democracy #gameofthrone #sanctions

tweet
Share on FacebookShare on TwitterShare on PinterestShare on Reddit
Saman SiddiquiNovember 5, 2018
the authorSaman Siddiqui
Saman Siddiqui, A freelance journalist with a Master’s Degree in Mass Communication and MS in Peace and Conflict Studies. Associated with the media industry since 2006. Experience in various capacities including Program Host, Researcher, News Producer, Documentary Making, Voice Over, Content Writing Copy Editing, and Blogging, and currently associated with OyeYeah since 2018, working as an Editor.
All posts bySaman Siddiqui