Casulties feared with a number of reported accidents due to strong winds. 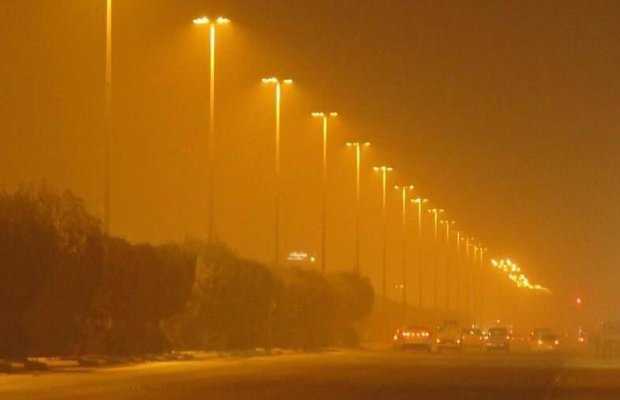 A heavy dust storm has hit Karachi on Wednesday evening, bringing in scattered rains and plunged many parts of the metropolis into darkness.

The dust storm has claimed 3 lives and with more than 15 people reportedly injured in separate accidents.

The sudden change in weather pattern was in due to the western disturbances that are passing through the country.

The dust storms have a speed between 54 and 74 kilometers per hour, according to the met department.

At 8 pm it was reported that the storms are expected to last for at least an hour more.

A number of accidents have been reported from various parts of the city, including the uprooting of trees and electricity poles.

As being reported a number of vehicles collided due to strong winds in the Gulistan-e-Johar and Gulshan-e-Iqbal area.

Read More : Karachi heatwave to push ‘feels like’ temperature to 47-50°C on Thursday, as Vayu morphs into a tropical cyclone

According to the Metrological department the cyclone Nisarga had formed a deep depression over the East-central Arabian Sea and intensified into a cyclonic storm at 1700PST.

Winds of up to 60km/hr should be expected it said.

tweet
Share on FacebookShare on TwitterShare on PinterestShare on Reddit
Saman SiddiquiJune 3, 2020
the authorSaman Siddiqui
Saman Siddiqui, A freelance journalist with a Master’s Degree in Mass Communication and MS in Peace and Conflict Studies. Associated with the media industry since 2006. Experience in various capacities including Program Host, Researcher, News Producer, Documentary Making, Voice Over, Content Writing Copy Editing, and Blogging, and currently associated with OyeYeah since 2018, working as an Editor.
All posts bySaman Siddiqui