The heavy downpour brought routine life and businesses to a standstill 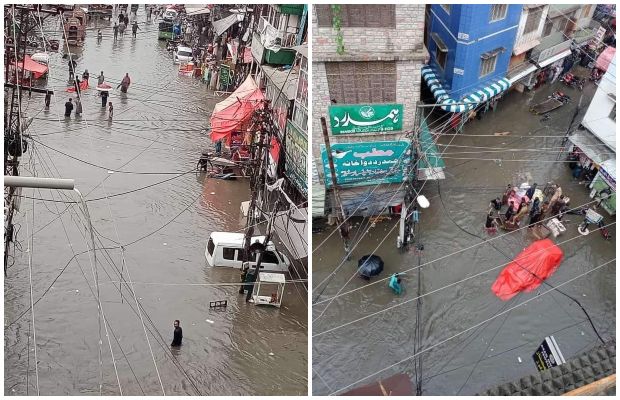 While all eyes were set on the news related to the SC hearing on the government’s plea to form a larger bench, Rawalpindi faced urban flooding due to continuous rain in twin cities.

The heavy downpour brought routine life and businesses to a standstill.


As reported, the power supply to several localities remained suspended for several hours amid heavy rain.


The scenes from today’s rain from the garrison city are being shared on social media.

And this.. would u like to report this!!! #Rawalpindi sinks! but all eyes 👀 in karachi!! Shameful part on Media. https://t.co/zuZR92DAdm pic.twitter.com/1IgWaAEJIX

Meanwhile Urban flooding in Rawalpindi due to continuous rain from Morning in twin cities. #Supreme_Court_Of_Pakistan pic.twitter.com/iUVDnpGPC2

Situation at Bohar Bazaar #Rawalpindi a while ago. pic.twitter.com/JCc8daDNjM

So far no loss of life was reported.