Hell Broke in India in form of COVID-19 Second Wave 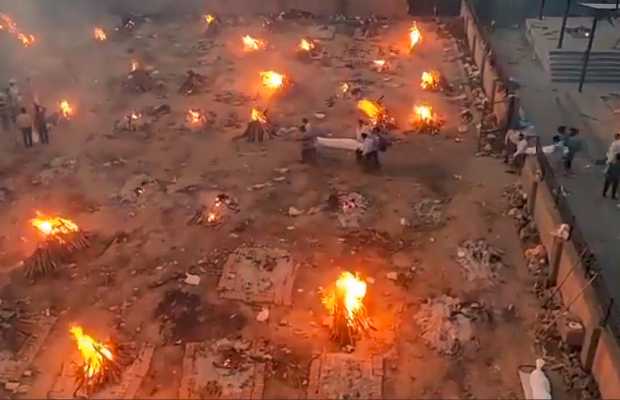 Hell Broke in India in form of COVID-19 Second Wave!

The harrowing images coming out of the second-most populous country, the seventh-largest country by land area, and the most populous democracy in the world continue to haunt the world.

The World Health Organization (WHO) stated that the situation in India was a “devastating reminder” of what the coronavirus could do.

The country recorded nearly a million infections in three days, with 346,786 new cases overnight into Saturday. While the number of deaths across India surges to 2,624 in the 24 hours to Saturday, up from 2,263 the previous day.

Authorities scrambled to supply medical oxygen to hospitals, while in the capital Delhi places run short to cremate the dead.

The government has deployed military planes and trains to get oxygen from the far corners of the country to Delhi.

According to Indian television, an oxygen truck arriving at Delhi’s Batra hospital after it issued an SOS saying it had 90 minutes of oxygen left for its 260 patients.

As being reported from the city of Surat, the grills used to burn bodies have been operating so relentlessly that the iron on some has actually melted.
Similar situations were faced in Kanpur, bodies are now being burned in some of the city’s parks; the crematories are backed up.
The social media timeline reveals the chaotic situation faced by the citizens of India. People dying on the pavement in the capital city as coronavirus crisis stretches India’s healthcare system to limit.
Doctors in India have been reduced to begging for help on social media, asking people to help boost low oxygen supplies.
tweet
Share on FacebookShare on TwitterShare on PinterestShare on Reddit
Saman SiddiquiApril 24, 2021
the authorSaman Siddiqui
Saman Siddiqui, A freelance journalist with a Master’s Degree in Mass Communication and MS in Peace and Conflict Studies. Associated with the media industry since 2006. Experience in various capacities including Program Host, Researcher, News Producer, Documentary Making, Voice Over, Content Writing Copy Editing, and Blogging, and currently associated with OyeYeah since 2018, working as an Editor.
All posts bySaman Siddiqui