PM Imran Khan was questioned about Harry and Meghan during an interview with Deutsche Welle (DW). 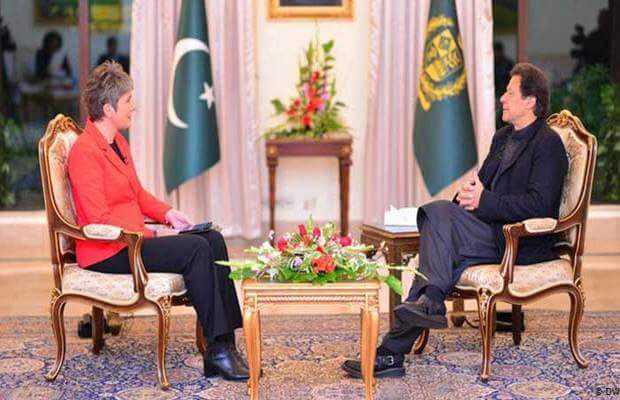 Prime Minister Imran Khan in an interview with German Broadcaster Deutsche Welle (DW) said that Harry and Meghan are young, have the right to live their life as they wish.

In the wide-ranging interview, premier shed light on several aspects of Pakistan’s relationship with other countries.

During the interview with DW, the premier said that the Duke and Duchess of Sussex have the right to live their life as they wish, without any intervention.

On a question about the crisis that was sparked by the royal pair, PM Khan replied: “I have so many issues in Pakistan to deal with. It doesn’t seem to be a huge issue for me.”

“I think, it’s their life. If that’s how they want to lead it, then why should people interfere?”, he added further.

During the interview, PM was also questioned about his thoughts on whether the late Princess Diana — who was known to be a friend of the prime minister — would have understood her son Harry and daughter-in-law Meghan’s decision of a royal exit.

“I guess so. Frankly, I haven’t really looked into it deeply. I think they are a young couple who want to lead their own life, so it’s up to them,” he said.

The announcement by Prince Harry and Megan Markel that they were stepping back as senior members of the royal family have proved all sorts of reactions. Though later, the Queen herself gave them her blessings over their decision, still #Megxit is the talk of the town.

tweet
Share on FacebookShare on TwitterShare on PinterestShare on Reddit
Saman SiddiquiJanuary 17, 2020
the authorSaman Siddiqui
Saman Siddiqui, A freelance journalist with a Master’s Degree in Mass Communication and MS in Peace and Conflict Studies. Associated with the media industry since 2006. Experience in various capacities including Program Host, Researcher, News Producer, Documentary Making, Voice Over, Content Writing Copy Editing, and Blogging, and currently associated with OyeYeah since 2018, working as an Editor.
All posts bySaman Siddiqui