The death toll from devastating floods in Pakistan crosses 1,200. 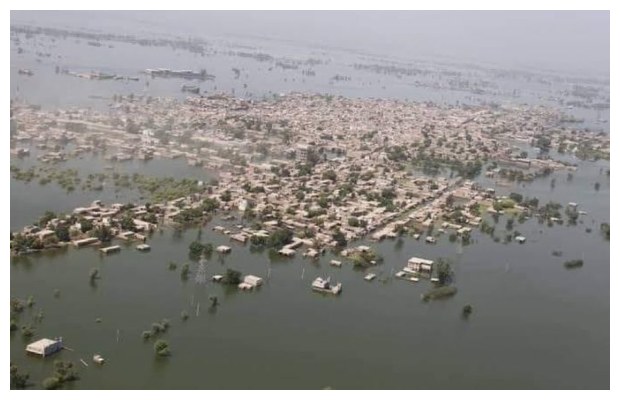 A high-level flood passed through Sukkur Barrage on Saturday while the water levels are persistently rising at the Manchhar Lake.

Sindh’s Dadu district is besieged by water and faces the continued threat of widespread devastation as a surge of water flowed down the Indus river.

As of 6 am on Saturday, a high-level flood of 559,988 cusecs was passing through Sukkur Barrage, reported Flood Forecasting Division.

A satellite image from the European Space station shows the scale of devastation of flood water. 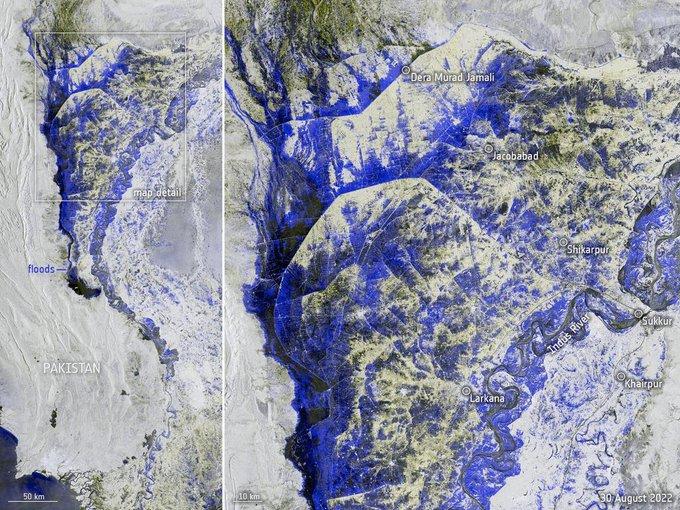 In the latest development reported, the floodwater had been gushing towards the district’s Johi tehsil, parts of which were already inundated.

The Indus River System Authority (IRSA) at first issued a warning of a high level of flood in the Indus River at Taunsa Barrage and Sukkur Barrage on Aug 29.
In the Dadu district, several villages are reported to have been submerged under as much as 11 feet of water.
While in neighbouring Mehar, residents were building a dyke in an attempt to prevent floodwaters from entering the town.

Dadu city, the capital of its namesake district, has submerged in water, with an inundated Khairpur Nathan Shah city to the north; Manchar Lake to the south; the Main Nara Valley (MNV) drain to the west; and the Indus to the east.

The MNV drain, some 8km from Dadu, is reported to be under full water pressure at its right embankment.

Thousands of citizens in nearby villages of Dadu and Sehwan brace for more flood water.

The death toll from devastating floods in Pakistan crosses 1,200.

According to the National Disaster Management Authority (NDMA), the record monsoon rains and melting glaciers in northern mountains brought floods that have killed at least 1,265 people since June 14, with 57 casualties reported during the last 24 hours,

The total number of people who have suffered injuries stands at 12,577, the NDMA said.

tweet
Share on FacebookShare on TwitterShare on PinterestShare on Reddit
Saman SiddiquiSeptember 3, 2022
the authorSaman Siddiqui
Saman Siddiqui, A freelance journalist with a Master’s Degree in Mass Communication and MS in Peace and Conflict Studies. Associated with the media industry since 2006. Experience in various capacities including Program Host, Researcher, News Producer, Documentary Making, Voice Over, Content Writing Copy Editing, and Blogging, and currently associated with OyeYeah since 2018, working as an Editor.
All posts bySaman Siddiqui