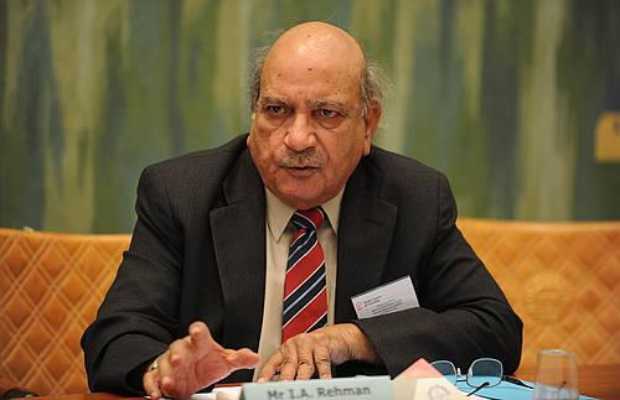 Rehman worked as director of HRCP for two decades and was also the group’s secretary-general till 31 December 2016.

Born in Haryana in 1930, he was a distinguished Lahore-based journalist and had a career spanning over 65 years.

IA Rehman had served as the editor-in-chief of the Pakistan Times from 1988-1990.

During the time of Dhaka fall, split of East Pakistan, he was working as the managing editor of Urdu daily Azad.

Rehman worked as editor of the Pakistan Times before joining the HRCP in the early 90s, first as director and later as secretary-general.

The services he rendered especially during the Zia regime tenure can not be forgotten, He fiercely and openly opposed the dictatorship of Ziaul Haq from 1978–88, At that time he was working as the executive editor of weekly Viewpoint.

IA Rehman also authored three books: Jinnah as a Parliamentarian (co-editor), Arts and Crafts of Pakistan, and Pakistan under Siege, a collection of his own columns.

On the news of his sad demise, several politicians, journalists, and other public figures took to Twitter to pay their last respects to the human rights defender.

“Shocked and immeasurably saddened to hear of IA Rehman’s passing from Covid! He was an icon of integrity, standing steadfast for every single fundamental right, every single democratic value in the worst of times. Pakistan will not be the same without him. May he rest in peace,” she said.

The Twitter timeline is flooded with messages on IA Rehman’s death as Pakistan mourns the loss of an icon.

A very sad day for #HumanRights activists. #IARehman was indeed a visionary leader & a mentor. His legacy will continue to guide us in resisting #Pakistan's worst ever #MartialLaw & #HumanRights abuses. Goodbye & #RIPRehman saib. Heartfelt condolences to @HRCP87 & his family. BG https://t.co/JMlflsSZCo

Pakistan’s iconic #IARehman sahib passes away.Innalilahe wa innaelehe rajioon.He was in the vanguard of Pakistan’s democratic struggle, always in the forefront of human rights struggle for Pakistan’s weak& excluded…he was the best of Allah’s Creation… to Him We Shall Return

Struggle for #HumanRights, #Democracy & objective #journalism ll be no more without him.

Team #SDPI would miss a patron & a great supporter. May Allah bless the departed soul. pic.twitter.com/Ngvj5trlcP

Heartbroken to learn about the sad demise of I. A. Rehman sahib.
A legendary human rights icon, a courageous voice, a veteran journalist has passed away.
He will always be revered & remembered!
Best ‘Tribute’ is to carry his legacy & continue his struggle. #RIP #IARehman
1/2

Heard the saddest news that journalist, human rights& peace icon, veteran columnist, #IARehman has passed away. Rehman Sb influenced a generation of writers, and activists including myself& we are all his collective legacy. He will be forever missed. pic.twitter.com/u6ZISDAdXf

A very sad day. He stood up for all those who couldn’t stand up for themselves. And he did it without any expectations of rewards or awards. It was the right thing to do. A man who deserves the respect of every Pakistani. RIP Rehman Sahab. We owe you a debt of gratitude. https://t.co/AwuvdX0awu

انالله واناإليه راجعون
There are rare examples where people have struggled for the rights of others, rights of underprivileged communities through out their lives. IA Rehman was one such example.
What a career! What a life! What a struggle.
Goodbye IA Rehman Sahab. Rest in peace. pic.twitter.com/xPlCPfAsYF

A giant is no more. He stood for principles, not slogans; stands, not shows. He was our moral compass, our collective conscience.

Thank you #IARehman, for your conviction, your wisdom, your life. pic.twitter.com/kAonGqZQaL