Her visit to the Line of Control (LoC), has also prompted a sharp response from the Indian government who termed the visit a violation of its "territorial sovereignty". 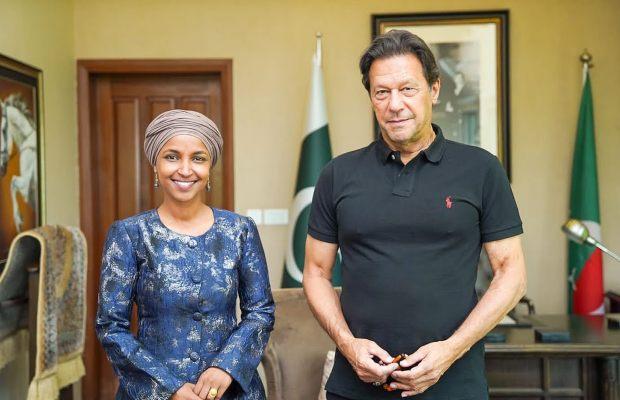 Congress Representative Ilhan Omar is currently on a visit to Pakistan that will conclude on April 24.

The visit comes in the wake of the ouster of Khan as prime minister. Khan has repeatedly said his removal was part of a “foreign conspiracy” in which the US played a role.

Department of State Spokesperson Ned Price said the visit of the US lawmaker was not “sponsored” by the US government.

During a press briefing, US State Department Spokesperson Ned Price was asked “Congresswoman Ilhan Omar met with Imran Khan in Islamabad. It was kind of an hour-long meeting. Close associates of Khan claim that the United States trying to clear the air with Khan. Is it true that Ilhan Omar is representing the Biden government there in Islamabad?”

Replying to the question, the spokesperson said “Well, as I understand it, Representative Omar is not visiting Pakistan on US Government-sponsored travel, so I’d need to refer you to her office for questions on her travel.”

The remarks come as an effort to clear the air as Omar, a Somali American who belongs to President Joe Biden’s Democratic Party is on a visit to Pakistan.

Earlier on Wednesday, she met former PM Khan at Bani Gala and discussed Islamophobia among other issues.

Ilan  Omar said the services of Khan for eradication of Islamophobia are second to none and that voices are being raised against the issue from all over the world, adding that draft legislation to curb Islamophobia is being brought to the US Congress.

On the other hand, her visit to the Line of Control (LoC), the de facto border dividing the disputed territory between Pakistan and India, has also prompted a sharp response from the Indian government who termed the visit a violation of its “territorial sovereignty”.

She visited Azad Jammu Kashmir and met its president to discuss rights abuses by India in occupied Kashmir.

“I don’t believe that it (Kashmir) is being talked about to the extent it needs to in Congress but also with the administration,” Omar told reporters after visiting the LoC.