His post featured a verse embeded on an image however,  it was not Allama Iqbal’s. 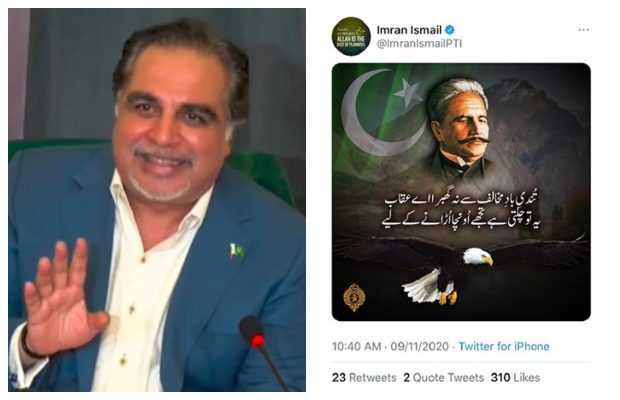 Governor Sindh Imran Ismail deletes his Tweet after he misquoted national poet and philosopher Allama Iqbal on his 143rd birthday on Monday.

His post featured a verse embeded on an image however,  it was not Allama Iqbal’s. Those were the lines of Syed Sadiq Hussain’s poetry.

The governor deleted the photo from his account after a number of people pointed out the mistake.

However, the screenshots of the post are still available over the internet: 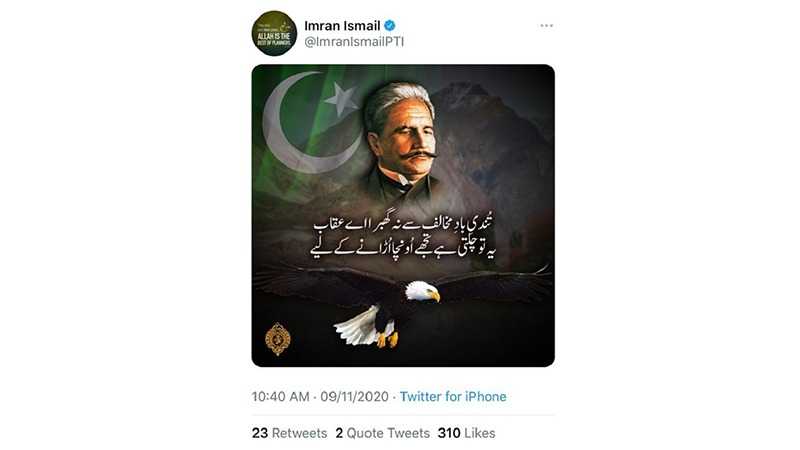 But someone’s mistake in this digital age can not get a pardon that easily, speciay if the person is holding a high profile post.

Earlier in June, PM Imran Khan has commited a similar mistake but he apologised on social media after he was criticised by a number of people.

I stand corrected – this is not Allama Iqbal's poem but the message conveyed is what I have stood by and tried to follow and if our youth absorbs this message it will release their great God- given potential that all of us possess as His greatest creation Ashraf ul Mukhluqat. https://t.co/SvDVrakc5d

tweet
Share on FacebookShare on TwitterShare on PinterestShare on Reddit
Saman SiddiquiNovember 9, 2020
the authorSaman Siddiqui
Saman Siddiqui, A freelance journalist with a Master’s Degree in Mass Communication and MS in Peace and Conflict Studies. Associated with the media industry since 2006. Experience in various capacities including Program Host, Researcher, News Producer, Documentary Making, Voice Over, Content Writing Copy Editing, and Blogging, and currently associated with OyeYeah since 2018, working as an Editor.
All posts bySaman Siddiqui