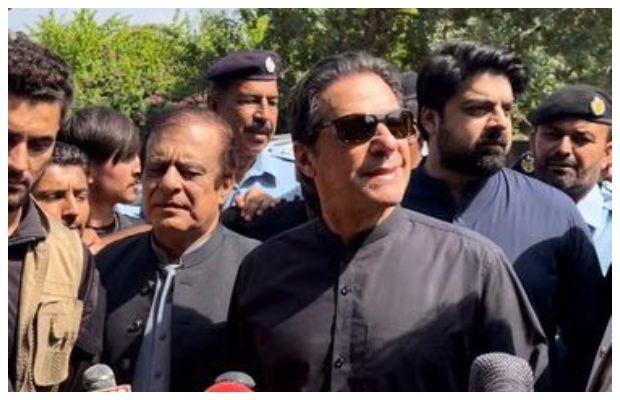 Imran Khan appears before JIT in terror probe on Wednesday in Islamabad.

Imran Khan was summoned to record his statement to the JIT.

According to the news source, Imran Khan faced some 20 minutes of an investigation by the JIT and answered questions posed by the police, which later handed the PTI chief a written questionnaire containing 21 queries.

Talking to the press after appearing before the JIT, Imran Khan reiterated his demand for free and fair elections.

The former prime minister speaking to the reporters said “Today was my first appearance in the JIT. Terrorism provisions were imposed against me. My message to the government is to prepare as much as you can.  They say that they used to collect funds on the telethon, and they closed the channels. Due to their theft, they do not get money. Tell anyone that I will take legal action for torture during custody. Shehbaz Gul was tortured. We said we will take legal action.”
PTI chief said that when it comes to action, provisions of terrorism have been imposed, this is a joke.
be prepared if they want to put me and my party against the wall.
“First, I was silent because there was an economic crisis, then there was a flood. He says that in 26 years of politics, I have never been a minister against the law. The world knows the definition of terrorism. The world is laughing at us because of the case.”

He went on to add that the sea of ​​people is starting to come out, and these people (government) cannot face the public. Only one thing can happen and that will be transparent elections. The waiting hours are going to end.
It should be noted that earlier Imran Khan did not appear before the JIT after being summoned twice.
He submitted his written reply through counsel.
tweet
Share on FacebookShare on TwitterShare on PinterestShare on Reddit
NewsDeskSeptember 14, 2022
the authorNewsDesk
All posts byNewsDesk