The PTI chairman went to Bani Gala after addressing the participants of the ‘Azadi March’ at Jinnah Avenue. 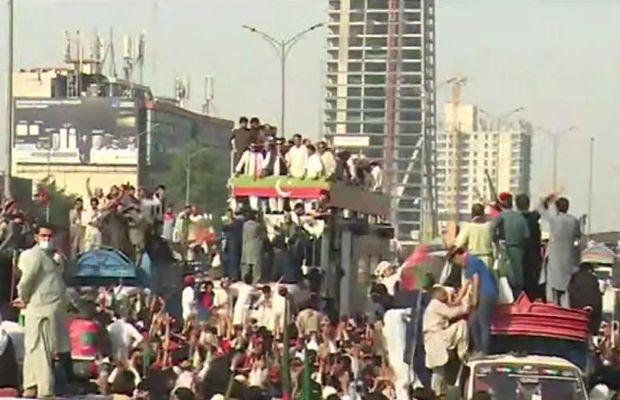 Imran Khan gives a six-day deadline to the government to dissolve assemblies!

After a packed day of political drama and violence across Pakistan on May 25 here comes the drop scene to the PTI’s Long March.

PTI chairman Imran Khan has given Thursday morning a six-day ultimatum to the PML-N government to dissolve the assemblies and announce an election.

The latest address by the PTI chairman indicated an end to the party’s much-touted ‘Azadi March’.

“If our demands get not accepted then we will return to Islamabad. Police and Pak Army are ours and we have come to unite the nation. The government wants disputes among us. I want justice from Supreme Court (SC)” he added.

Imran Khan went on to add that every kind of tactic was used to make the freedom movement unsuccessful.

“Our leaders and workers got arrested,” he said.

“More than half of the current cabinet members are on bail. The nation will not accept imported government,” he said.

The PTI chairman went to Bani Gala after addressing the participants of the ‘Azadi March’ at Jinnah Avenue.