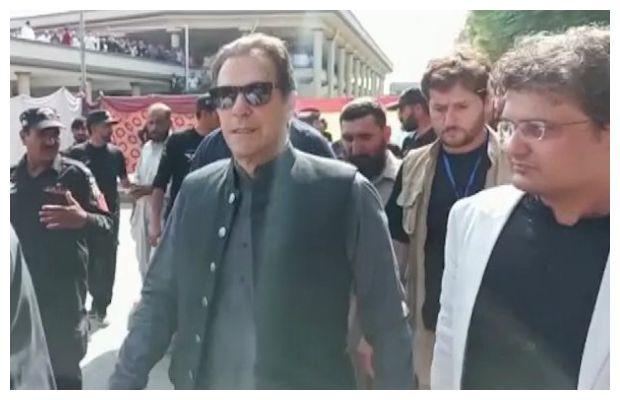 Imran Khan’s replies to the court’s show-cause notice appeared to be justifying contempt of the judiciary and he showed no remorse or regret, IHC CJ Minallah remarked as he appeared before the court.

On Thursday, a five-judge larger bench of the Islamabad High Court (IHC) resumed the hearing against Pakistan Tehreeek-e-Insaf (PTI) Chairman Imran Khan on the charge of contempt of court for threatening Additional Sessions Judge Zeba Chaudhry during a PTI public rally in Islamabad’s F-9 Park on Aug 20.

“Imran Khan’s case doesn’t fall under these two verdicts. The two cases were totally different from that of Imran Khan,” he maintained.

IHC CJ Minallah remarked that there are three types of contempt of court, described in the Firdous Ashiq Awan case which was a matter of scandalizing the court.

“There is civil contempt of court, the second is judicial contempt, and the third criminal contempt,” he said.

“Would you have submitted the same reply if these words were used for a Supreme Court or a high court judge?” Justice Minal­lah asked.

IHC CJ  highlighted that Imran Khan was giving the justification that Gill was tortured while in police custody.

“Tell us will the decisions be taken in rallies or the courts,” Justice Minallah inquired.

PTI chairmen on Thursday morning, a few hours before the hearing, filed a miscellaneous application before the court seeking permission to submit written arguments in the case.

In his plea, Imran Khan argued that the high court cannot exercise suo moto jurisdiction as per the Constitution. The arguments on the inadmissibility of the contempt case should be kept on record.

“The written arguments will also be explained during the course of the proceedings,” read the plea.

IHC in its previous hearing on Aug 31 gave PTI Chairman another chance to submit a “well-considered” response in the contempt proceedings initiated against him for his controversial remarks about Judge Zeba Chaudhry.