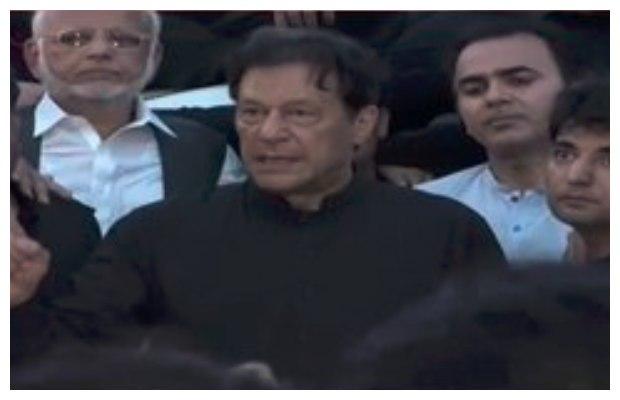 Imran Khan after not being allowed to meet Shahbaz Gill at PIMS, announces nationwide rallies to show solidarity with Shahbaz Gill!

As reported, Pakistan Tehreek-e-Insaf (PTI) Chairman Imran Khan on Friday evening reached PIMS Hospital in Islamabad to meet his aide Shahbaz Gill however, the authorities did not allow him to meet.

Former Prime Minister Imran Khan announced countrywide rallies on Friday against the alleged torture of his chief of Staff, Shahbaz Gill after he was not allowed to meet Gill at PIMS hospital, today.

Imran Khan reached PIMS from Bani Gali accompanied by the legal team of the PTI to brief the legal aspects of the torture of Shahbaz Gill during remand.

Imran Khan while talking to the media outside the hospital said he was not allowed to meet Shahbaz Gill so he will hold a rally to release him in Islamabad on Saturday.

Imran Khan added Shahbaz Gill was subjected to torture so people should take streets at all divisional headquarters of the country against the rulers’ brutality.

Imran Khan’s car had climbed on the iron board next to the green area.

As the car got punctured, Imran Khan got out of his car and sat in another car.

As he was not allowed to meet Shahbaz Gill, after which he left the cardiology ward.

tweet
Share on FacebookShare on TwitterShare on PinterestShare on Reddit
Saman SiddiquiAugust 19, 2022
the authorSaman Siddiqui
Saman Siddiqui, A freelance journalist with a Master’s Degree in Mass Communication and MS in Peace and Conflict Studies. Associated with the media industry since 2006. Experience in various capacities including Program Host, Researcher, News Producer, Documentary Making, Voice Over, Content Writing Copy Editing, and Blogging, and currently associated with OyeYeah since 2018, working as an Editor.
All posts bySaman Siddiqui