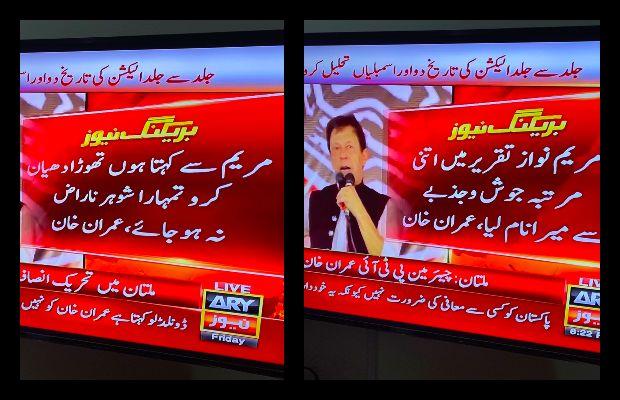 The latest remarks from the PTI Chairman add to a new political low in the history of Pakistan.

“The way you (Maryam Nawaz) passionately take my name in your speech, be careful it may upset your husband (Muhammad Safdar Awan), Imran Khan said at the charged PTI supporters’ gathering in Multan on Friday evening.

Calling names to political opponents is the worst new trend the nation has seen in the recent few months.

It was the other day when PML-N Vice President Maryam Nawaz labeled PTI Chairman a Fitna while addressing a public gathering in Sargodha.

For many netizens, including journalists and politicians, the comments from Imran Khan proved to be derogatory and didn’t suit the former officeholder to stoop such low.

Imran Khan says Maryam Nawaz’s husband might get upset because she speaks of him with such emotion.

He knows he can get away with sexism and innuendo with absolutely impunity so he’s a repeat offender. pic.twitter.com/enuWbaJZBr

Imran Khan’s comments about Maryam Nawaz Sharif are not only repulsive they are dangerous. The message it sends to men and boys is that personal attacks against women are okay. That women are not deserving of respect, dignity and power.

Imran Khan the misogynist’s remarks against Maryam Nawaz were vulgar & cheap.Women of Pakistan can’t feel safe around such men.He once said that men aren’t robots so they might rape women because of their dresses.Sexualising women has been his forte from his younger days to date.

Imran Khan’s comment on Maryam Nawaz is in utterly bad taste, something he should never have said about anyone anywhere.
And I condemn it without resorting to any whataboutery.

The words have been used for Maryam Nawaz by Imran Khan, are true reflection of struggle, anxiety and dirt, working women face in this society. #MaryamNawaz #ImranKhan #MaryamNawazSharif @MaryamNSharif @ImranKhanPTI

The vile language that Imran Khan used for @MaryamNSharif is outright disgusting and is an example of the kind of filth that PTI and their handlers have introduced into the mainstream of Pakistani politics. Imran Khan and his followers remain devoid of any basic sense of decency.

Imran khans remarks against @MaryamNSharif are not only disgusting and disrespectful but also give us an insight into the mind of an arrogant self-centred man, who knows no boundaries, respects nobody,shams women & is hellbent on poisoning an entire generation of young Pakistanis

This is low, even by his own level! pic.twitter.com/nYfeXsT69r

The reactions from PML-N leadership also emerged on Twitter timeline in between all the mayhem.

Even outside of politics, @MaryamNSharif has given strength to every Pakistani girl, shown true meaning of resilience, uprightness and courage.
No sexist remarks can snatch this award from her.#پنجاب_کی_بیٹی_پاکستان_کی_عزت

Simply disgusting. Using language which is degrading and a new low even by Pakistani standards. Clearly shows IK is rattled by Maryam’s massive support around the country pic.twitter.com/5AhaGx63k0