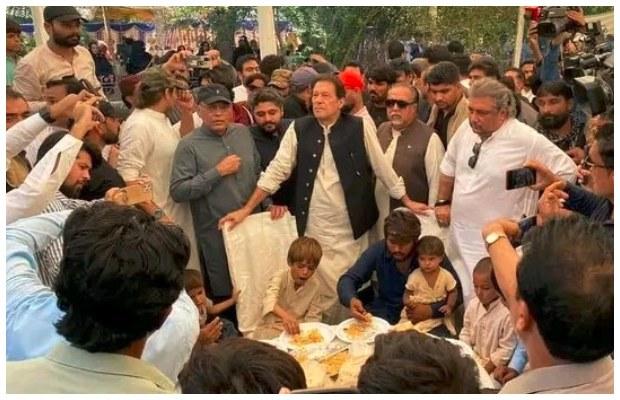 PTI chairman Imran Khan visited Sukkur on Monday and met the flood-hit families in a camp.

As reported a meal was served to the flood victims, and where PTI Chairman inquired about their condition and distributed relief goods among them.

Imran Khan also held a meeting with the senior party leaders in Sukkar.

They discussed the relief programme after the devastation caused by the floods in Sindh.

Chairman Tehrek e Insaf Imran Khan meeting flood affectees in Sakkhar today. The only leader in 🇵🇰 who thinks and cares about his own people. #InsafReliefProgrampic.twitter.com/aZxovHtJgW

According to PTI, its chairman inaugurated the #Insaf Relief Program for flood victims of Sindh today.

A day earlier, addressing the Faisalabad Jalsa Former Prime Minister Imran Khan announced that he would hold another international telethon next Sunday to raise funds for flood victims.