The mass protest in India against the contentious citizenship law continues across several states and amid fears the legislation is part of the Hindu nationalist government's agenda to marginalise the country's 200 million Muslims. 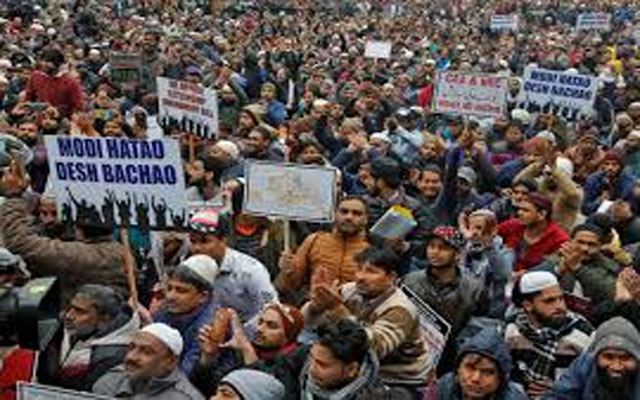 India has almost reached the brink of disaster in Modi’s leadership. Since the time he has been elected, he has taken rapid controversial steps in depriving the Muslims in every other aspect.

Firstly, Modi planned to attacked Kashmir by revoking its special status in Article 370 in a bid to integrate its only Muslim-majority in the Indian region.

Indian Home Minister Amit Shah told parliament that the president had signed a declaration abolishing Article 370 of the constitution that gave a measure of autonomy to the Muslim-majority Himalayan region.

Amidst the unrest, a Curfew was imposed in all 10 districts of the valley on 15 July and mobile services were suspended by the government. Kashmir valley remained under 149 days of consecutive curfew which was lifted from all areas on 31 August, however, was re-imposed in some areas the next day.

The Indian Supreme Court, later announced the delayed Ayodhya Verdict, clearing the way for a Hindu temple to be built at the disputed holy site.

The court ruled the site in Ayodhya in northern India, where Hindu mobs destroyed a 460-year-old Babri Mosque in 1992. The decision of the Indian top court came as a true example of India gave way to its nakedly extremist doctrine of Hindutva.

Under the new law, India will grant citizenship to the six communities that Modi’s government says have historically faced persecution in the three Muslim-dominated neighbours.

The Modi government says Muslims cannot be treated as persecuted minorities in those countries.

The mass protest in India against the contentious citizenship law continues across several states and amid fears the legislation is part of the Hindu nationalist government’s agenda to marginalise the country’s 200 million Muslims.

The passing of the infamous CAA sparked anger all over in India and at least 27 people have been killed in the unrest, and around a thousand arrested so far.

The authorities in the state of Assam implemented the ban on mobile and internet services across the state on December 11 which was later put in place after two weeks following violent protests against the citizenship law.

Assam has been protesting against CAA as several groups fear that the newly-amended law would lead to an influx of migrants into the state thus disrupting its ethnic fabric.

Tens of thousands of citizens took to the streets of a number of Indian cities as protests began after December 11.

It turned violent after demonstrators injured in the clashes with local police in Delhi at Jamia Millia Islamia University.

Demonstrations all across in India

In the capital, New Delhi, police fired tear gas and charged with batons as several thousand demonstrators marched, and rallied outside the Jamia Millia Islamia university and police headquarters.

Not only that, but police also detained dozens of students from the campus.

Thousands of Indians have been protesting against a new citizenship law as well as possible plans for a National Register of Citizens (NRC), alleging the measures are an attack on a secular constitution and against minority Muslims.

Authorities in the northeastern state of Assam began using the NRC to identify illegal immigrants in 2015, on the orders of the Supreme Court.

It was only meant to be used for the ethnically-diverse region but since then, there have been calls from officials of the ruling party and its supporters for its nationwide implementation.