Night curfew, restrictions in several states, cities have been imposed to curb COVID surge in India 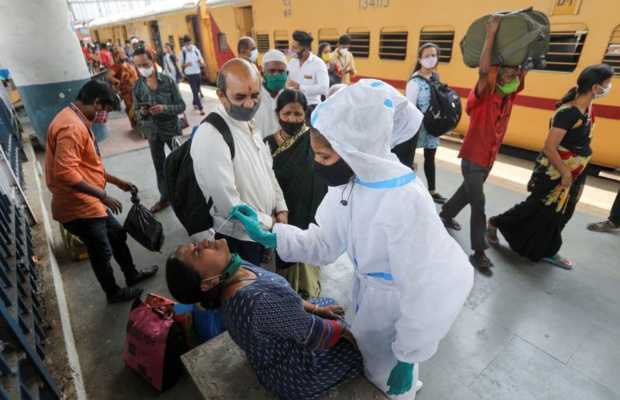 India has recorded the highest single-day spike in coronavirus cases since the pandemic started.

On Saturday, the country has reported more than 1.45 lakh new coronavirus cases, in a single day. While night curfew, restrictions in several states, cities have been imposed to curb COVID surge in India

According to the data shared by the Health Ministry on Saturday morning, India reported 794 deaths in the last 24 hours, taking the total death toll from the pandemic to 1,68,436.

The fresh fatalities reported include 301 from Maharashtra, 91 from Chhattisgarh, 56 from Punjab, 46 from Karnataka, 42 from Gujarat, 39 from Delhi, 36 from Uttar Pradesh, 32 from Rajasthan, 23 each from Madhya Pradesh and Tamil Nadu, 22 from Kerala, 17 from Jharkhand and 11 each from Andhra Pradesh and Haryana.

Amid the surging cases of COVID-19, New Zealand earlier this week announced that it was suspending the entry of travellers from India, including its own citizens.

New Zealand Prime Minister Jacinda Ardern in a news conference in Wellington on Thursday announced that the suspension will take effect from April 11 and will be in place till April 28.

As reported by Reuters, the move comes after New Zealand recorded 23 new positive coronavirus cases at its border on Thursday, of which 17 were from India.

Congress leader slammed the Centre for its vaccine management

India’s largest political party Congress president Sonia Gandhi on Saturday also held a meeting with the chief ministers of Congress-ruled states regarding the spike in COVID-19 cases around the country.

Sonia Gandhi said, “The Modi government has mismanaged the situation. It has exported vaccines and allowed a shortage to be created in India.”
She said all public gatherings and poll rallies should be cancelled as the number of COVID-19 cases is on the rise and asked the chief ministers if the economic packages announced by the Centre had the desired impact.
“Mass gatherings for elections and religious events have accelerated Covid for which all of us are responsible to some extent. We need to accept this responsibility and keep the interest of the nation above our own,” the Congress chief said.


tweet
Share on FacebookShare on TwitterShare on PinterestShare on Reddit
Saman SiddiquiApril 10, 2021
the authorSaman Siddiqui
Saman Siddiqui, A freelance journalist with a Master’s Degree in Mass Communication and MS in Peace and Conflict Studies. Associated with the media industry since 2006. Experience in various capacities including Program Host, Researcher, News Producer, Documentary Making, Voice Over, Content Writing Copy Editing, and Blogging, and currently associated with OyeYeah since 2018, working as an Editor.
All posts bySaman Siddiqui