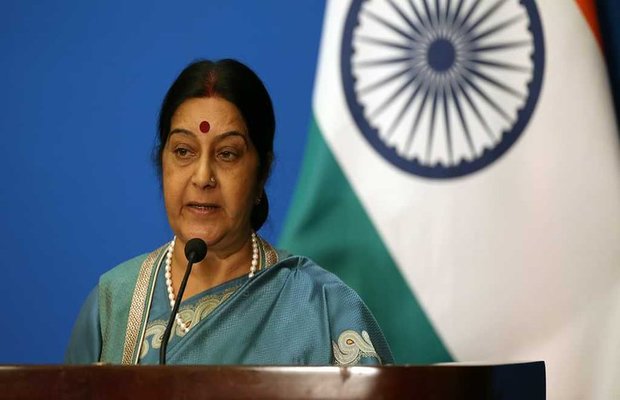 Senior BJP leader had been rushed to the All India Institute of Medical Sciences in New Delhi earlier this evening at 9 pm local time, in a critical condition after suffering from cardiac arrest, but passed away later.

Sushma Swaraj was the senior leader of Bharatiya Janata Party (BJP). She served as the Minister of External Affairs of India from 26 May 2014 to 30 May 2019; Sushma was the second Indian woman to hold the office, after Indira Gandhi.

Reportedly, Sushma underwent a kidney transplant in 2016 and had opted out of contesting in the 2019 Lok Sabha elections citing ill health.

She had been an active Twitter user during her term in office and onwards. Her last message on twitter was shared on Tuesday evening, congratulating Indian PM over the passing of key bills pertaining to Jammu, Kashmir and Ladakh.

On her sudden demise condolence messages are pouring in on social media: 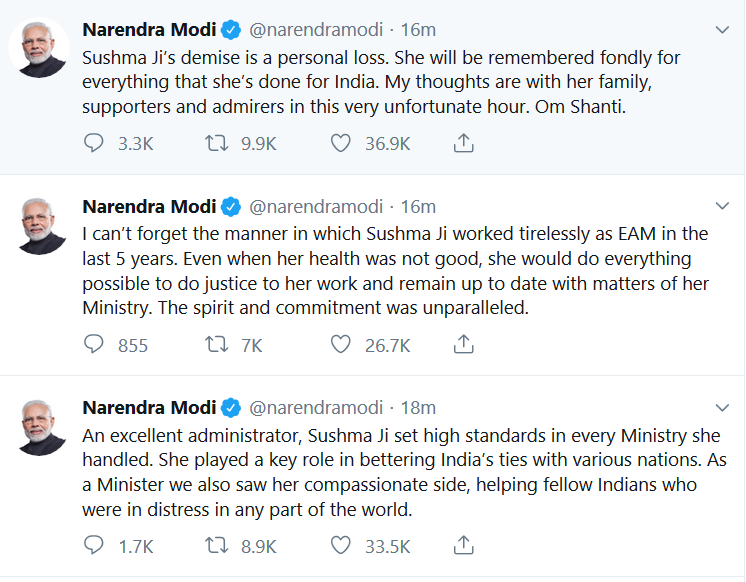 We are saddened to hear about the untimely demise of Smt Sushma Swaraj. Our condolences to her family and loved ones. pic.twitter.com/T9wg739c8i

An extremely tragic news. #SushmaSwaraj ji will be remembered as the most endearing & graceful politician of recent times. Our deepest condolences to her family and friends. #RIPSushmaJi pic.twitter.com/H90uzqA3xT

I have an axe to grind with you Didi . You made Bansuri pick a restaurant to take me for a celebratory lunch. You left without fulfilling your promise to the two of us.

Deeply saddened that Sushma Swaraj has passed away.Inspite of political differences we had an extremely cordial relationship. I was 1 of her Navratans as she called us during her I and B ministership and she gave industry status to film. Articulate sharp and accessible. RIP

Here in the West Indies and just heard the terrible news of passing away of #SushmaSwaraj ji. Condolences to her family, gone too soon 🙏🏼 pic.twitter.com/Mp2zRP6GBa

My sincere condolences on passing away of #Sushmaswaraj ji. One of the finest leader of our country.She was special and we will miss her.Sending my prayers to family and friends. pic.twitter.com/BeYy6S9TmN