Indians demonstrate against massacre of Delhi Muslims in London

The protesters demanded the arrest of the BJP politicians and leaders who prompted the riots. 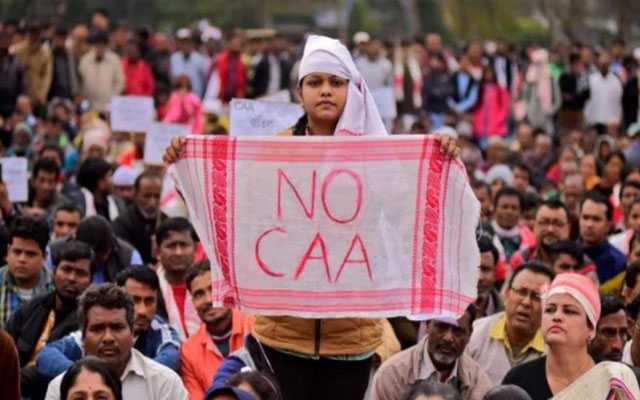 Amidst the riots in India, a large number of Indians demonstrated outside the Indian High Commission Saturday asking for the resignation of Home Minister Amit Shah, BJP instigators’ arrest and justice for the survivors of Delhi massacre.

The protesters carried banners and pla-cards condemning attacks on Muslims in Delhi by extremist groups BJP and RSS.

The protestors called for Home Minister Amit Shah’s resignation over his failure to maintain peace and stability in India. They also demanded the arrest of the BJP politicians and leaders who prompted the riots.

“As members of the Indian and South Asian diaspora in the UK, we stand with the survivors of the Delhi pogrom and the courageous anti-CAA movement. We condemn the close relationship between the Boris Johnson government and Modi’s genocidal BJP government. This alliance of far-right regimes has been deepened by the appointment of British Indian Modi supporters including Priti Patel and Rishi Sumak to key cabinet positions,” Nirmala Rajasingam of South Asia Solidarity Group said.

Nadia Whittome MP said, “The Delhi Pogrom has already killed 38 Indian Muslims, with many injured. This is no accident, Modi has led India here and the horrific scenes in Delhi show BJP ideology in action. British Indians will not be silent.”

The demonstrators asked for all the perpetrators of the riots are brought to justice; they also demanded for giving the compensation to the families of victims.

The protesters also demanded that the Chief Minister Arvind Kejriwal and his AAP government play their constitutional role by taking effective measures to ensure peace and justice for the victims and survivors.

Anjum Mouj of London Black Women’s Project said, “We are shocked by the horrific anti-Muslim pogrom spearheaded by the Hindutva right this week. But we are truly inspired to see that the women of many areas of Delhi have returned to their sit-in protests. These women have been occupying these sites like Shaheen Bagh for the past two months in the bitter North Indian winter cold. We in the UK and across the world must learn from their strength and courage in these turbulent times of increasing fascism.”

They demanded UK government to immediately issue a strong condemnation to Modi’s government for sponsoring the anti-Muslim massacre in Delhi.

They said that while Modi was praising US President Donald Trump, Delhi was ablaze with anti-Muslim riots in which 38 people were killed and hundreds critically injured.

The South Asian Students Against Fascism had this to say, “The violence in Delhi must not be seen as a riot. What has happened is a state-sponsored pogrom against the city’s Muslim communities. There is a mountain of evidence showing how BJP leaders and their media ecosystem incited mobs to commit violence, how the police either stood by or actively participated in this violence, and how the courts have completely abdicated responsibility.”

SOAS India Society was of the opinion, “India is now a fascist Hindu dictatorship where the rule of law has been suspended. If the world does not take note and react urgently, the consequences will be disastrous.”

A large number of people in North East Delhi have been evacuated and displaced after their homes burnt and livelihoods destroyed.