Around 700,000 vehicles entered Kaghan Valley during the Eid holidays 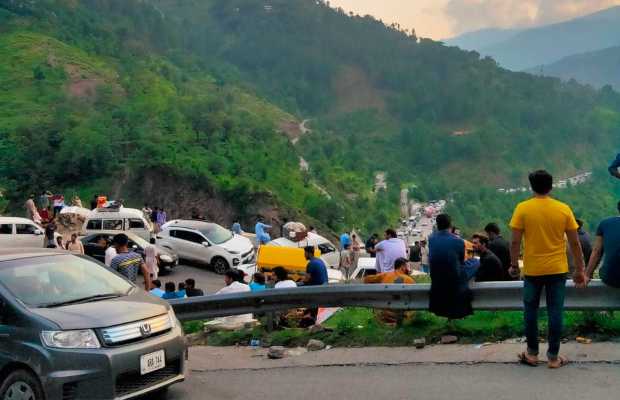 An influx of tourists in Kaghan Valley triggers a fuel shortage!

As being reported, the tourists flocked to the valley from within the country and abroad visited the Babusar Top, Saiful Muluk Lake, Lulusar and even Dodi Pat Sar.

The roads of the area were choked triggering major traffic jams as a record number of people headed to the area.

While long queues of vehicles were seen at every filling station in the area as the tourists struggled to find fuel as the local petrol pumps are not equipped to cater to the demand.

According to the District Police Officer (DPO) Asif Bahadur, “Around 0.7 million vehicles carrying tourists have entered the valley so far and more motorists are on the way to this picturesque destination.”

“We have never seen such a huge number of vehicles entering the valley but we are doing our best to manage the traffic flow within the available resources,” the police officer added.

Even social media had been buzzing about the traffic jam in the northern areas!

Babusar pass had to be closed off because of the insane traffic- a car fell off a cliff there. There is no driving ethics- people overtaking, making two three lanes on a small two way road, people driving for 10 hours to cover 20km

No petrol available in naran-kaghan-balakot.. stuck in traffic from 11 AM and traveled only 20 km in 9 hours. Still the traffic is stuck for about 15 km balkot … @NHMPofficial and yes thank you @ImranKhanPTI @PTIOfficialISB @PTIofficial

I have personally Experienced this traffic jam in Naran to ballakot. It was due to Bad Management and Due to shortage of Fuel. We bought Petrol on the price of 200rs/liter from Kaghan. pic.twitter.com/SeiPf2rDos

No sign of district administration at #Naran no Traffic Police. Tourist performing the police duty to clear the jammed traffic. #cmkp #PTIGovernment #kppolice literally no administration in whole naran kaghan. Prices are so high with no justification. #ShameOnYou pic.twitter.com/OXRQQWNaAD