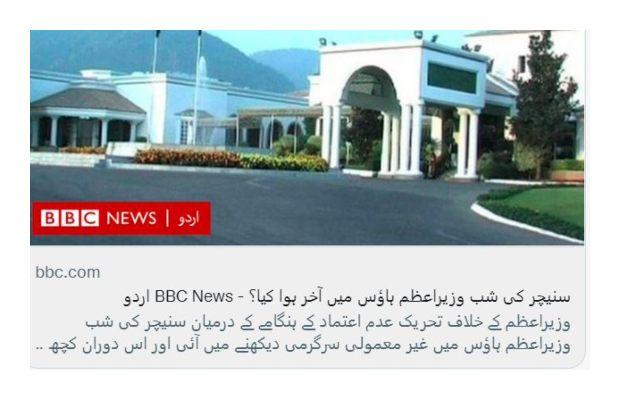 ISPR has refuted the story published in BBC Urdu on Sunday.

The Inter-Services Public Relations in a statement refuted the story published in BBC Urdu terming it totally baseless and a pack of lies.

In a statement on Sunday, ISPR said the typical propaganda story lacks any credible, authentic, and relevant source and violates basic journalistic ethos.

“There is no truth in the fake story whatsoever and clearly seems part of an organised disinformation campaign,” ISPR says.

The matter is being taken up with BBC authorities, it added.

The BBC Urdu published on Sunday with alleged claims about what happened at the PM House on Saturday evening.

BBC Urdu claims that as the vote of confidence crisis deepened last night, Imran Khan fired army chief Bajwa but was unable to get the decision implemented.

“Amidst the uproar of the no-confidence motion against the Prime Minister, the extraordinary activity took place in the Prime Minister’s House on Saturday night, during which some historic decisions and events took place, some in front of the cameras and most in closed rooms,” the story claims.

“Parliament House was the center of activity throughout the day on Saturday, with speeches sometimes held and meetings adjourned, with government and opposition members holding talks between the Speaker and the National Assembly.
“But in the evening, when the National Assembly session was adjourned for Iftar, the center of activity suddenly became the Prime Minister’s House. Prime Minister Imran Khan convened an emergency meeting of the federal cabinet, along with his legal and political advisers, the speaker and deputy speaker, and some bureaucrats.
“The cabinet meeting approved the release of the alleged cable to some officials, which former Prime Minister Imran Khan said contained details of a US plot to overthrow his government.

The story alleged that “two uninvited guests” reached PM House, with an extraordinary security detail, via helicopter and held a 45-minute private meeting with Imran.

BBC Urdu by quoting government sources — said that the meeting was less than pleasant. “Just an hour ago, former prime minister Imran Khan had given orders to remove one of the senior officials present for the meeting,” the story alleged, without taking any names.

It went on to say that the sudden arrival of the guests was “unexpected” for the former premier, adding that Imran was instead expecting the arrival of his “newly appointed officials”.

The story alleged that the necessary notifications for the removal and the new appointment were not issued by the Ministry of Defence.

“Even if the removal was carried out on the prime minister’s orders, preparations had been made to declare it null and void,” the BBC report said.

The story also talked about how the doors of the Islamabad High Court (IHC) were open late at night to take up a petition asking the court to restrain Imran from possibly de-notifying Chief of Army Staff (COAS) Gen Qamar Bajwa.

The story concluded by claims, “It is important to note here that this request was prepared but left blank in place of the notification number for the removal of the Chief of Army Staff. The reason for this was that despite the request of the Prime Minister, the notification could not be issued and thus it was not the turn of hearing on this petition.”

tweet
Share on FacebookShare on TwitterShare on PinterestShare on Reddit
Saman SiddiquiApril 10, 2022
the authorSaman Siddiqui
Saman Siddiqui, A freelance journalist with a Master’s Degree in Mass Communication and MS in Peace and Conflict Studies. Associated with the media industry since 2006. Experience in various capacities including Program Host, Researcher, News Producer, Documentary Making, Voice Over, Content Writing Copy Editing, and Blogging, and currently associated with OyeYeah since 2018, working as an Editor.
All posts bySaman Siddiqui