Reportedly, at least 178 Palestinians were injured in the violence on Friday evening. 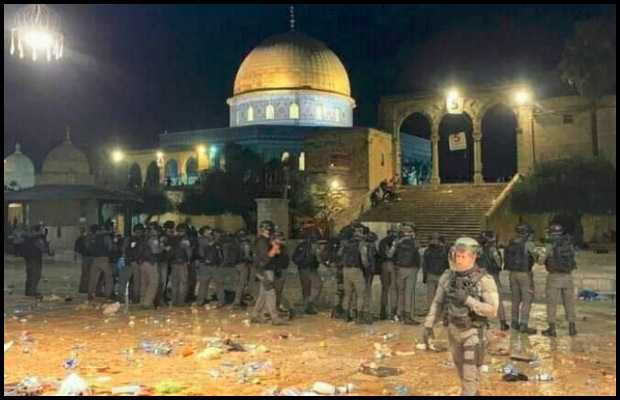 As bring reported, Israeli police have attacked Muslim worshippers inside the Al Aqsa Mosque in occupied East Jerusalem’s Old City as weeks-long tensions between Israel and the Palestinians over Jerusalem soared once again.

Reportedly, at least 178 Palestinians were injured in the violence on Friday evening.

According to the Palestinian Red Crescent emergency service, 83 people were hospitalized while most of the wounded suffered injuries on faces and eyes from rubber-coated bullets and shrapnel from stun grenades.

As being reported, clashes erupted when Israeli police deployed heavily as Muslims were offering evening prayers at Al-Aqsa during the holy month of Ramadan.

Earlier, tens of thousands of Palestinian worshippers had packed into the mosque on the last Friday of Ramadan and many stayed on to protest in support of Palestinians facing eviction from their homes on Israeli-occupied land claimed by Jewish settlers.

Video footage from the scene being shared on social media shows worshippers throwing chairs, shoes, and rocks towards the police and while the Israeli officers opened fire.

“There's a #Palestine that dwells inside all of us”#SaveSheikhJarrah pic.twitter.com/wc42iw6in5

enough is enough. no one deserves to live with such fear within them. no child or adult needs to pass through such trauma. innocent peoples lives are being taken every day. WAKE UP. RAISE YOUR VOICES. SPREAD AWARENESS. #SaveSheikhJarrah
💔 pic.twitter.com/hXf6eEJFn3

Do you wanna see real face of terrorism??

Attack on worshipers during Taraweeh prayers in Al-Aqsa Mosque
How long will Muslim countries remain silent?
Any justification for the silence of the international community on this attack ?
May Allah free #Palestine #IsraeliAttackonAlAqsa#PalestinianLivesMatter pic.twitter.com/aJSDzGccWC

The tensions in the city continued to sore after the Friday sermon given by Sheikh Tayseer Abu Sunainah, as the core topic was the Israeli-Palestinian conflict.

Israeli forces set up several roadblocks and checkpoints along the way to the holy site, blocking thousands of Palestinians from the occupied West Bank were blocked from reaching the Al-Aqsa Mosque.

“Our people will remain steadfast and patient in their homes, in our blessed land,” Abu Sunainah said of the multiple Palestinian families in East Jerusalem’s Sheikh Jarrah neighbourhood who could be evicted under a long-running legal case.

Following Friday prayers, thousands remained in the compound to protest against the evictions, with many waving Palestinian flags and chanting a refrain common during Jerusalem protests: “With our soul and blood, we will redeem you, Aqsa”.

Last night’s raid on the holy mosque has left the hashtag #SaveSheikhJarrah trending on social media.

Last Friday, Israeli troops killed two Palestinians and wounded a third in a shooting incident after the men opened fire on a base belonging to Israel’s paramilitary Border Police force in the occupied West Bank.