Momoa feels strongly about protecting the site on Mauna Kea on the island of Hawaii. 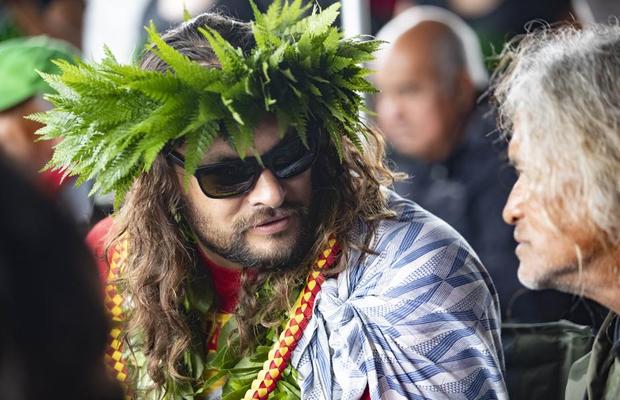 Enraged Momoa posted a photo on his Instagram showing a telescope being constructed, pointing out the drastic damage done to the land and explaining that Hawaii’s planned Thirty Meter Telescope will be much more catastrophic to the site where it is being built.

Aquaman star has joined thousands of activists in protest of the telescope’s construction and feels strongly about protecting the site on Mauna Kea on the island of Hawaii.

Momoa wrote, ” Sorry Warner Bros we can’t shoot Aquaman 2. Because Jason got run over by a bulldozer trying to stop the desecration of his native land”.

“This is so much bigger than a telescope being built,” said Johnson. “This is humanity, these are human beings whose hearts are hurting, and I think any time situations like that come up… that’s our indication that we gotta stop. Let’s be considerate, let’s be empathetic, and let’s always take care of our people.”

FUCK THIS. And TMT is 4x bigger. Sorry Warner Bros we can’t shoot Aquaman 2. Because Jason got run over by a bulldozer trying to stop the desecration of his native land THIS iS NOT HAPPENING. WE ARE NOT LETTING YOU DO THIS ANYMORE. Enough is enough. Go somewhere else. Repost. This is what telescope construction looks like (Subaru Telescope, 1992). The TMT will be four times larger on unscathed land. We must protect our scared mountain from further desecration. #KuKiaiMauna #WeAreMaunaKea #TMTShutdown

Hollywood star Jason Momoa has joined in the Native Hawaiian protesters who oppose the construction of giant telescope at Mauna Kea’s summit, Hawaii.

Hawai’i State Canoe Championships HCRA. Full represent for the MAUNA The facts the truth TMT + MAUNA KEA = DESECRATION. The solution TMT + CANARY ISLANDS = DISCOVERY. If not Canary Islands. then tough shit send it to space. We support science. More importantly it’s astronomy and we support that also considering we Polynesians have sailed our oceans guided by the stars But this has to stop you can not build an 18 story building on our sacred mountain. If u can’t build past 7 story’s in Hilo or Kona then who decides and why the FUCK would u build 18 on our mauna Shame on you. Anyone who supports this shame on you. Have you not taken enough from the Kānaka Maoli. Aole TMT #kukiaimauna #wearemaunakea #dadbodsrule #livealoha #alohaalwayswins #canaryislandshelpUs Aloha BIG J

For native Hawaiians summit is a sacred site for them though, the summit also has the best conditions for astronomy in the Northern Hemisphere.

This badass just posted for us protectors. #repost @leonardodicaprio #RG @ashlukadraws: WE ARE MAUNA KEA. Standing in solidarity with protesters on Mauna Kea, protecting the Sacred ‘āina from scientific imperialism. It breaks my heart to see indigenous people and land continue to be dismissed by the state of Hawaii and its wealthy developers. Words from @kanielaing: “You don’t have to be Hawaiian to understand the dangerous precedent this sets. Mauna Kea impacts all of us. It’s an environmental struggle against wealthy developers who seek free reign. It’s a microcosm of what’s happening across Hawaii and the world: profiteers exploiting fragile places without regard for the future. We’re not concerned about how many passive dollars this will bring our economy. We are concerned about whether we will be able to breathe in 20 years, or be out of fresh water, or have any space left in our sacred places, or if the beaches we grew up in still be there. Some things are more important than a quick buck—like our planet’s and peoples’ survival. That would be $1.3 billion well spent. #maunakea #wearemaunakea #kukiaimauna” To support, visit kahea.org / donate to Hawaii Community Bail Fund (link in highlights) ❤️ ———————- This image was drawn using stills from my friends at @standingabovetheclouds, a beautiful, powerful portrayal of the mothers and sisters at the forefront of the fight to protect sacred land on the Big Island.

Moamoa also joined in the protesters along with his children last week. Protesters have blocked the road to the summit for 17 days. 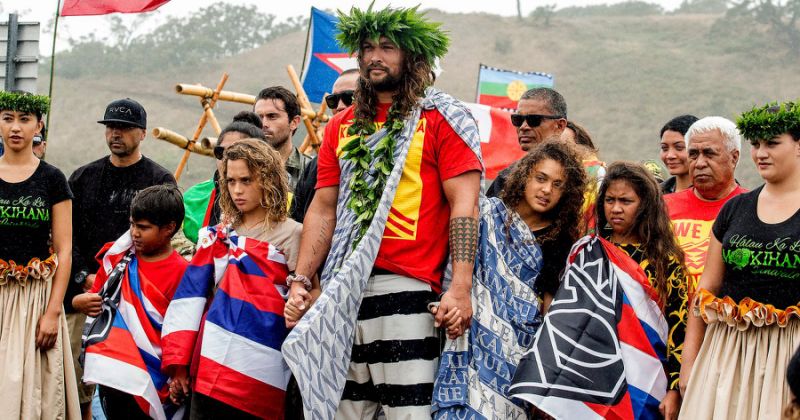 Momoa is being supported by his fellow Hollywood superstar Dwayne “The Rock” Johnson, who while appearing on The Tonight Show With Jimmy Fallon last month explained that the construction is taking place at a location that Johnson likened to church grounds.