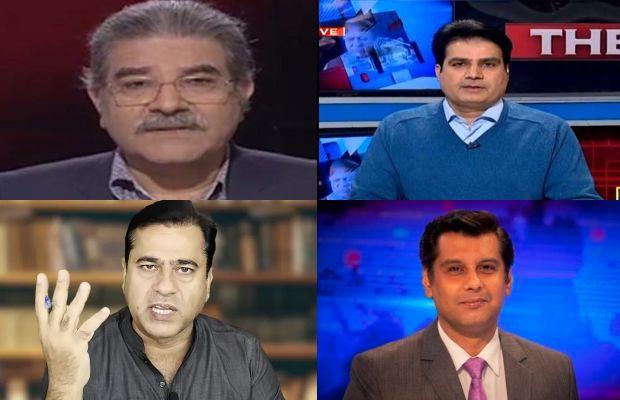 According to Arshad Sharif “multiple cases” have been registered against the four journalists in various police stations across the country.

As reported, an FIR against journalist Imran Riaz Khan was registered in Thatta’s Dhabeji police station under Sections 131 (incitement to mutiny), 153 (provoking to cause riot), and 452 (trespassing), and 505 (statement conducing to public mischief) of the Pakistan Penal Code (PPC).

Journalists Imran Riaz Khan took to social media to reveal a copy of the FIR filed against him.

On the other hand, two FIRs were also registered against journalist Arshad Sharif on Friday and Thursday in Hyderabad and Karachi.

FIRs referred to the comments made by Arshad Sharif in a conversation with journalist Matiullah Jan on his YouTube channel. The journalist has been alleged of “disrespected” state institutions and uttered statements that attempted to “spread hate in the army and create a hateful atmosphere”.

Meanwhile, a case was registered against ARY News journalist Sabir Shakir in Dadu on Friday under PPC Sections 131, 153, and 505.

As per the FIR,  “derogatory language” regarding state institutions was used in a conversation between the two, and analogies were drawn to Mir Jafar and Mir Sadiq. It added that the two were inciting people against the army and state institutions.

While a defamation case was registered against senior journalist Sami Ibrahim in Attock.

The FIR was filed on the basis of a complaint by Akhtar Javaid advocate, a resident of Attock city, who claimed that he viewed ‘Canadian Pak News’, a Youtube channel of Mr. Ibrahim, a resident of Lahore, two weeks ago.

“He gave his opinion in his vlog against the right of speech with bad attention and used obnoxious words against the judiciary and armed forces.’

PTI Chairman Imran Khan has slammed the PML-N government for filing FIRs against the journalists and branded it “political retaliation”.

Imran Khan alleged that the government was behind the “fake FIRs” and said it was “absolutely unacceptable”.

I strongly condemn the political victimisation of journalists Arshad Sharif, Sami Ibrahim, Imran Riaz Khan through fake FIRs by the Imported government brought in through US regime change conspiracy. This is absolutely unacceptable.