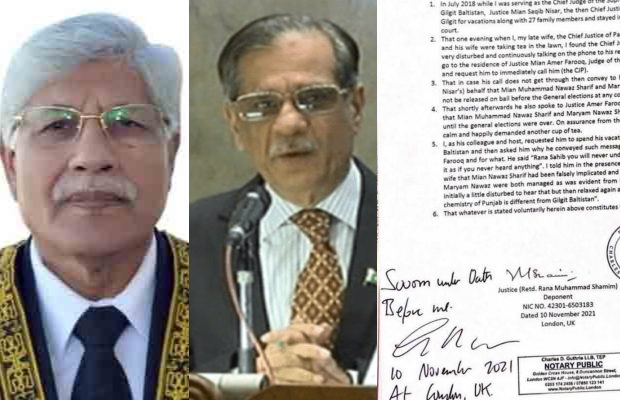 The Islamabad High Court (IHC) has summoned the former chief justice of Gilgit-Baltistan Justice (retd) Rana Shamim in relation to his allegations against ex-CJP Saqib Nisar.

As being reported, the IHC has also summoned Shamim, editor-in-chief of The News, editor of the newspaper, and journalist Ansar Abbasi for Tuesday’s hearing.

An investigative report issued by The News had stated that then CJP Saqib Nisar had directed a high court judge to not release Nawaz Sharif and Maryam Nawaz on bail at any cost before the 2018 General Elections.

According to the affidavit, Shamim’s statement was given under oath before the Oath Commissioner on November 10, 2021.

The affidavit, duly notarised, contains the signature of the ex-CJ of Gilgit Baltistan as well as an image of his NIC card.

The notary public stamped the affidavit and recorded that it was “sworn under oath before me” on Nov 10, 2021. 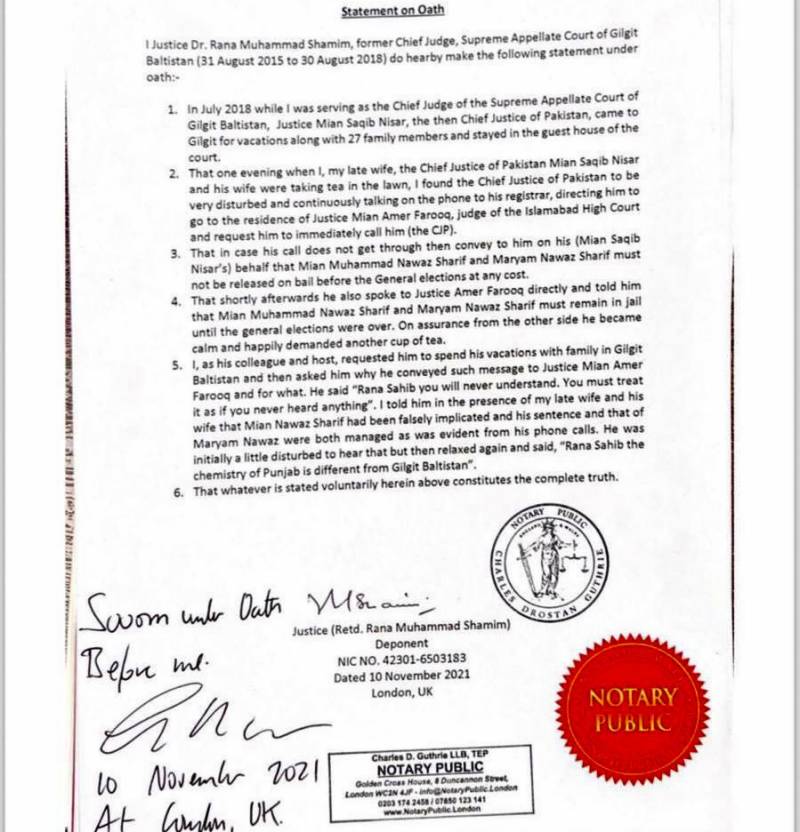 The former chief justice of Pakistan Mian Saqib Nisar reacts to the allegations:

The former chief justice of Pakistan Mian Saqib Nisar has rejected allegations levelled against him by a former top judge of Gilgit-Baltistan, Rana Shamim, regarding collusion to deny bails to former premier Nawaz Sharif and his daughter Maryam Nawaz before general elections 2018.

Earlier in the day, former CJP Saqib Nisar said that Rana Shamim was asking for an extension as Gilgit Baltistan Chief Justice but I didn’t approve.” What I can say on this lie of Rana Shamim, he added.

Saqib Nisar said that it’s not wise to record reactions to every fake and baseless allegation.

Reactions to the claims are pouring in from both the government and the opposition:

PML-N President Shehbaz Sharif in a tweet said that an explosive news story by Ansar Abbasi peeled off a thick layer of a grand scheme employed to target Nawaz Sharif and Maryam Nawaz.

“Allah has His own way of revealing the truth. It’s yet another vindication of Nawaz Sharif & Maryam in the court of public opinion. Alhumdulillah,” he added.

Meanwhile, Information Minister Fawad Chaudhry responding to the claim in a tweet said, “One clown after another is running a campaign in this country to try to make it out like Nawaz Sharif is a victim.”

“Instead of fabricating silly stories and conspiracy theories, tell me where Nawaz Sharif got the money for the Avenfield Apartments that were later given to Maryam Nawaz? But Maryam claimed she got no property in London or even in Pakistan. Now the property of billions has come to light. Answer it,” he added.

On the other hand, Advisor to Prime Minister on Accountability & Interior(Federal Minister) Mirza Shahzad Akbar in a tweet said,” A Rana Sahib from Sahiwal was appointed as the Chief Judge of Gilgit by Prime Minister Nawaz Sharif in 2015 and Rana while returning the favor, today made a statement in favor of fugitive convict Nawaz Sharif which came two days before the High Court hearing of Batia’s appeal. Hidden on the front page. Wow politics.”

tweet
Share on FacebookShare on TwitterShare on PinterestShare on Reddit
Saman SiddiquiNovember 15, 2021
the authorSaman Siddiqui
Saman Siddiqui, A freelance journalist with a Master’s Degree in Mass Communication and MS in Peace and Conflict Studies. Associated with the media industry since 2006. Experience in various capacities including Program Host, Researcher, News Producer, Documentary Making, Voice Over, Content Writing Copy Editing, and Blogging, and currently associated with OyeYeah since 2018, working as an Editor.
All posts bySaman Siddiqui