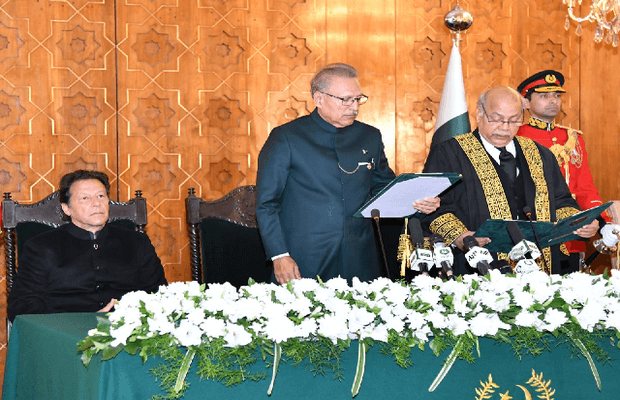 Justice Gulzar Ahmed on Saturday has sworn in as the 27th Chief Justice of Pakistan. He will serve as the country’s supreme judge until February 2022.

The oath-taking ceremony was held at Aiwan-e-Sadr in Islamabad, where President of Pakistan Dr. Arif Alvi administered the oath.

“As chief justice of Pakistan, I will discharge my duties and perform my functions honestly, to the best of my ability and faithfully, in accordance with the Constitution of the Islamic Republic of Pakistan and the law,” he said.

Justice Ahmed replaces chief justice (retd) Asif Saeed Khosa, whose tenure came to an end with his retirement yesterday after serving as the country’s top judge.

Earlier on December 4, the law ministry issued the notification of the appointment of Justice Gulzar Ahmed as the new chief justice of Pakistan.

The notification stated, “In exercise of the powers conferred by Clause (3) of Article 175 A, read with Article 177 of the Constitution of the Islamic Republic of Pakistan, the President is pleased to appoint Mr. Justice Gulzar Ahmed, the most senior judge of the Supreme Court, as Chief Justice of Pakistan with effect from December 21, 2019.”

Justice Gulzarwas born in Karachi in 1957. He started his practice at the Sindh High Court (SHC) in 1986. He became the Supreme Court advocate in 1988 and later become the SHC judge in 1992. Justice Gulzar is serving as a Supreme Court judge since November 16, 2011.

He was elected as honorary secretary of the Sindh High Court Bar Association, Karachi, for the year 1999-2000.