With her stance over the ban on Pakistani artists, Kangana paves her way to being Indian darling for sure 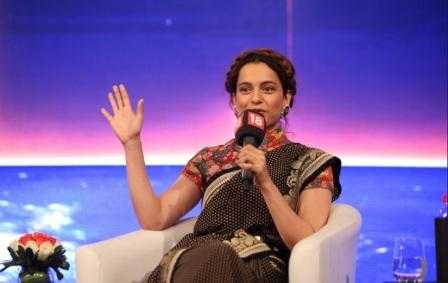 Kangana Ranaut was among the speakers who were invited at News 18’s Rising India Summit on 17 March, 2018, reports Indian media. Where she shared her thoughts confidently, declaring that she is a big fan of Indian Prime Minister Modi and that his of democracy. Kangana also added how she was in support of the ban put on Pakistani artists.

In a way supporting the ban put on Pakistani artists Kangana Ranaut did stress over point that artistic realm is different from the physical realm. “But we can’t ignore the physical borders. During the ban in India on Pakistan artists, people were emotional, “Humko kya Lena dena, hum toh artist hai (We are artists, why should we care?)”.

The actress talks loud on being Indian nationalist, she spoke about Pakistani artists earning by working in India but not paying taxes over there, adds Kangan Ranaut, ” No, you are Indians as well, and your soldiers are dying at the border, you can’t talk about that”, bashing people who are against this ban imposed on Pakistani artist.

Kangana also doesn’t believe in religion and has come to the conclusion that her only identity is the fact that she is an Indian, reports Indian media. Kangana also spoke about the people who have an issue standing up for the National Anthem. She added, “Why are you ashamed of your nation? When Americans stand up to the national anthem, they do it with hands on their heart. Why are we ashamed to do that? I am with my army, with my soldiers and I am a cool youngster of the 21st century,” said Kangana representing her strong patriotic side.

It was last year when actress Kangana Ranaut managed to make headlines with multiple controversies including the never ending nepotism debate and then publicly bashing Hrithik Roshan. Taking side over the nationalist ingredient which sells more than anything in India, she paves her way to being Indian darling for sure.

tweet
Share on FacebookShare on TwitterShare on PinterestShare on Reddit
Saman SiddiquiMarch 20, 2018
the authorSaman Siddiqui
Saman Siddiqui, A freelance journalist with a Master’s Degree in Mass Communication and MS in Peace and Conflict Studies. Associated with the media industry since 2006. Experience in various capacities including Program Host, Researcher, News Producer, Documentary Making, Voice Over, Content Writing Copy Editing, and Blogging, and currently associated with OyeYeah since 2018, working as an Editor.
All posts bySaman Siddiqui