The passengers were returning home after attending a marriage ceremony 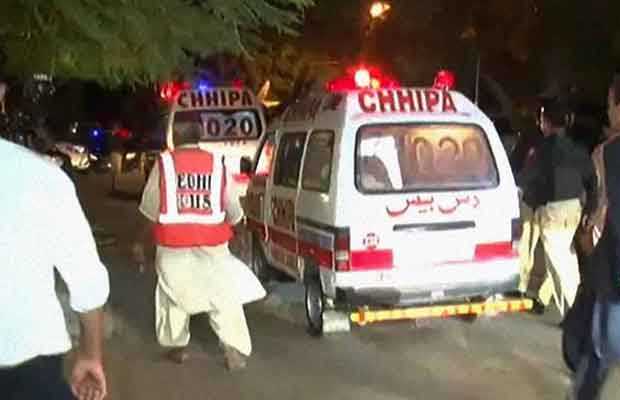 A grenade attack on a truck has left 11 people killed while several others were injured on Saturday evening near Baldia Town’s Mawach Goth area in Karachi.

As per the police source, the victims belonged to the same family and were the passengers who were returning home after attending a marriage ceremony.

According to our source, the family hails from Landhi while the ancestral home is from Swat.

As being reported the family hails from local leaders of Jamaat-e-Islami and Awami National Party.

The condition of some of the injured is critical.

A press release of Jamaat-e-Islami said that the Deputy Qaim Jamaat-e-Islami Malir District Meraj Khan Swati’s family has fallen victim to the terrorist attack in Baldia Town in which 11 people including his wife and daughter have been martyred and 10 injured.

A senior official of the Counter-Terrorism Department (CTD), Raja Umer Khattab said that the initial investigations revealed that it was a grenade attack.

He said that the grenade exploded before it could hit the floor of the vehicle and that the initial investigations showed that the attackers were on a motorcycle.

South Zone DIG Javed Akbar Riaz said that the incident took place around 9:45 pm and the truck was carrying around 20-25 people.

The passengers were returning home after attending a marriage ceremony, he added.

Additional Inspector General of Police Imran Yaqoob said, “We cannot concretely say who was behind the attack. It may be a family dispute, which we are trying to ascertain, or it may be an act of terrorism. But unless we have solid evidence, we cannot provide a final verdict on this. It will be premature to say anything at this stage.”

Six women and four children were among the victims.

He added that 10 others who were injured in the incident had been brought to the hospital for treatment.

According to him all four of the deceased children were male and between 10 to 12 years of age.

Sindh Chief Minister Murad Ali Shah  has sought a report from the provincial transport minister about the vehicle, enquiring whether the truck belonged to Sindh or another province.

CM also directed the transport minister to provide details about the vehicle’s fitness certificate and the cause of the explosion.

Shah also directed the health secretary to shift the injured to the Burns Centre of Dr Ruth Pfau Civil Hospital Karachi for the treatment.

Meanwhile, Adminstrator Karachi Murtaza Wahab took notice of the incident and sought details from the Keamari SSP. In a statement, he said that investigators were probing the incident from different angles.