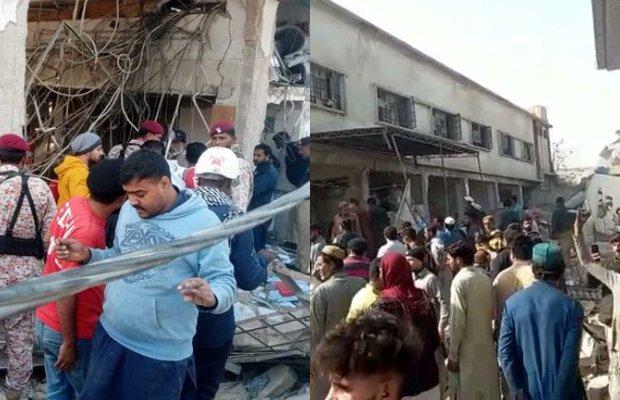 At least 11 people were killed and scores injured in a blast in Karachi’s Shershah Paracha Chowk area on Saturday afternoon.

According to initial reports, the blast took place in a gas pipeline running through a nullah located in the area.

At least 15 people were reportedly injured while rescue efforts are being carried out.

The massive blast resulted in causing immense damage to the private bank’s building which was constructed on the nullah.

According to the eyewitness, the powerful explosion reduced the Habib Bank building into ruins. The adjacent buildings and vehicles parked outside were also damaged as a result of the blast.

The explosion took place inside the bank’s building, said an eye witness adding, there were a few bank customers who were buried beneath the debris as well.

SHO Zafar Ali Shah said the explosion took place in a drain located underneath the bank building, which had been served a notice to vacate the premises so the nullah could be cleaned up.

Sindh Chief Minister Syed Murad Ali Shah taking notice of the incident has directed the commissioner Karachi to conduct an inquiry into the incident and submit a report over its findings, a spokesperson of the chief minister said.

“Police officers should be included in the inquiry so that all aspects [of the blast] can be investigated, ” the chief minister said, expressing deep sorrow over the loss of lives in the blast.

CM Murad has issued instructions to the secretary of health to provide necessary facilities to the injured at the Civil Hospital immediately.