Karachi heatwave to push ‘feels like’ temperature to 47-50°C on Thursday, as Vayu morphs into a tropical cyclone

Karachites are being warned about the intensity of heatwave caused by the cyclone. 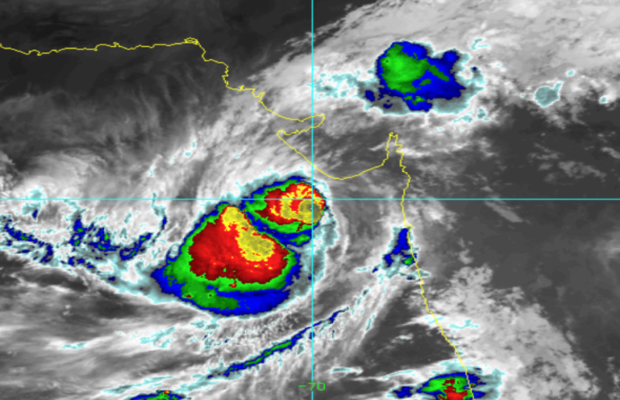 The Cyclone Vayu has been upgraded to Category-1 earlier on Wednesday, transforming into a tropical cyclone.

This situation will be worsening the heatwave in Karachi and as the mercury forecast is expected to hit 39-42°C. The ‘feels like’ temperature could shoot to 47-50°C due to the humidity factor in Karachi’s climate.

Meanwhile, the entire Sindh province is expected to receive continued heatwave till June 16, according to the Pakistan Meteorological Department (PMD).

According to the PMD, the sea breeze is also predicted to remain cut off, Karachi is expected to receive a sandstorm with a touch of light rain on Thursday.

Rain and thunderstorm expected in Badin, Thatta, and Tharparkar districts of Sindh, due to Cyclone Vayu.

According to the Pakistan Meteorological Department (PMD), “Tropical cyclone Vayu in the East Arabian Sea has intensified as ‘very severe cyclonic storm’ and moved further north-northwestward during last six hours, now lay centered around Lat.18.N and Long.70.0E at 0800PST at a distance of about 725 km southeast of Karachi.

“The maximum sustained surface winds are 135-145 km/hour gusting to 160 km/hour around the system centre,” the PMD said.

It further added: “Vayu is likely to continue to move in northerly direction. Under the influence of this system, widespread dust and thundershowers with scattered heavy to very heavy falls are expected in southeast Sindh (Thatta, Badin and Tharparkar districts) on Thursday and Friday.

“While scattered/isolated Dust-thundershowers may occur in rest of Sindh during the period.”

The PMD said that the effect of Cyclone Vayu would be limited to India’s Gujrat but was expected to hit its shore in the evening tomorrow.

Moving towards western India and now classed as a very severe cyclonic storm, Cyclone Vayu has strengthened and is packing gusts of up to 170 kilometers per hour (105 mph), according to forecasters. Gujarat authorities are reportedly trying to evacuate more or less 300,000 people living in coastal areas. 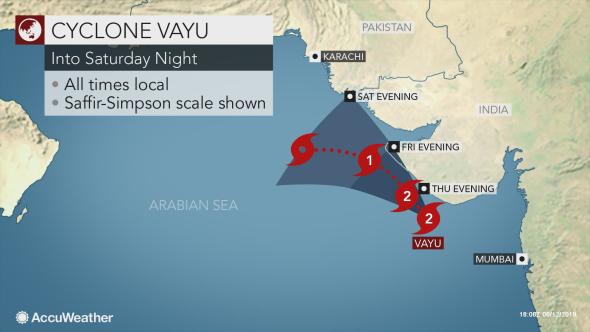 Reportedly there is no threat imminent from Cyclone Vayu for the Karachi’s coastal area for the time being; though, the metropolis’ maritime boundary may experience flooding and waves can go as high as 12 feet.

tweet
Share on FacebookShare on TwitterShare on PinterestShare on Reddit
Saman SiddiquiJune 13, 2019
the authorSaman Siddiqui
Saman Siddiqui, A freelance journalist with a Master’s Degree in Mass Communication and MS in Peace and Conflict Studies. Associated with the media industry since 2006. Experience in various capacities including Program Host, Researcher, News Producer, Documentary Making, Voice Over, Content Writing Copy Editing, and Blogging, and currently associated with OyeYeah since 2018, working as an Editor.
All posts bySaman Siddiqui