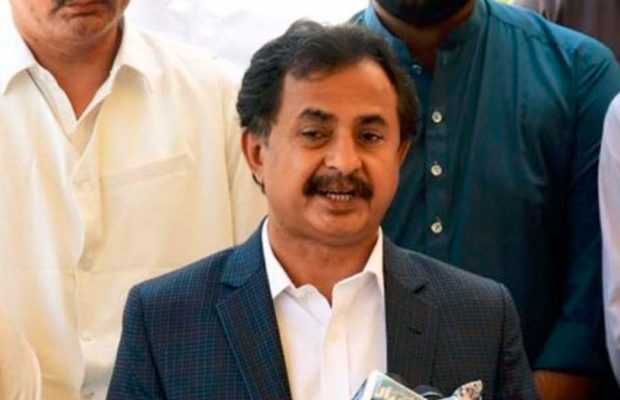 PTI’s Haleem Adil Sheikh has been booked for disrupting the anti-encroachment drive in Karachi.

The case was filed after an anti-encroachment operation against Sheikh’s family farmhouses in Karachi on Saturday in which anti-encroachment teams encountered resistance, with protesters throwing stones at government staff and smashing windows of their vehicles.

The police officials said that the first information report (FIR) has been registered against Haleem Adil Sheikh, the leader of the Opposition in the Sindh Assembly.

The FIR includes clauses pertaining to disturbing peace, financial loss to government property, assault on government employees, attempted murder, intimidation, and interference in the government’s work during an anti-encroachment drive carried out at his Malir farmhouse.

The case was filed at the Memon Goth police station on behalf of Muhammad Ayub, a resident of Karachi’s Korangi neighbourhood naming at least 70 people, including the PTI lawmaker.

Meanwhile, commenting on the development, the Sindh Information and Local Government Minister Nasir Hussain Shah said the operation against encroachments is being conducted under the orders of the Chief Justice of Pakistan Justice Gulzar Ahmed.

According to the officials, more than 500 acres of government land worth billions have been relinquished so far in the ongoing anti-encroachment drive.

Haleem Adil Sheikh has termed the anti-encroachment operation as an act of “political revenge” by the government of Sindh and demanded the Chief Justice of Pakistan to take suo motu notice.

On the other hand, the administration claims that the land was leased for 30 years for poultry farming and agricultural purposes but was being used for commercial purposes.

tweet
Share on FacebookShare on TwitterShare on PinterestShare on Reddit
Saman SiddiquiFebruary 7, 2021
the authorSaman Siddiqui
Saman Siddiqui, A freelance journalist with a Master’s Degree in Mass Communication and MS in Peace and Conflict Studies. Associated with the media industry since 2006. Experience in various capacities including Program Host, Researcher, News Producer, Documentary Making, Voice Over, Content Writing Copy Editing, and Blogging, and currently associated with OyeYeah since 2018, working as an Editor.
All posts bySaman Siddiqui