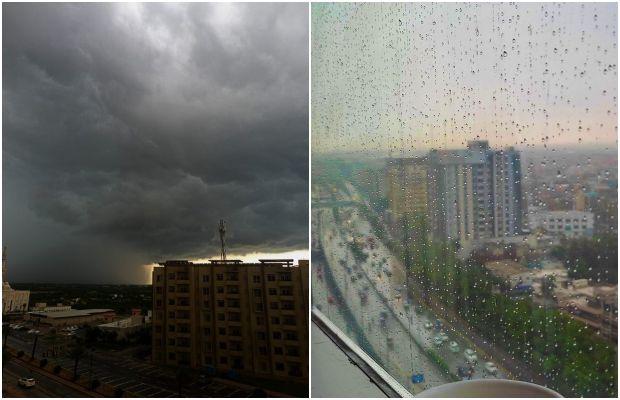 Karachi receives a fresh monsoon spell! while the new system is likely to intensify in the next 24 Hours.

The Pakistan Met Office says that monsoon currents have been continuously penetrating the atmosphere and were likely to become stronger from today (Wednesday).

According to Sardar Sarfraz, chief meteorologist in Karachi, there may be heavy rain in the city tonight (Wednesday).

The intensity of rain is likely to be high on August 12 and 13, he said, adding that rain was expected to continue till August 14. “From 100mm to 150mm of rain is expected in Karachi in this spell.”

He was of the view that the rain might continue till August 16 or 17 in Balochistan, which reported almost all of the overall flash floods deaths in the last spell.

“The trough line [a line along which pressures are lower than in the surroundings and where the cyclonic curvature of the isobars is a maximum] from the South of Arabian Sea to the Bay of Bengal near Karachi,” Sarfraz said.

The fresh monsoon spell kicked in the port city which has been appearing hotter than usual over the past few days due to the rise in humidity levels.

While many flocked to social media to share updates on #KarachiRain

Let the rain wash away all the pain of yesterday – #KarachiRains pic.twitter.com/xYfFRDN1vp

Karachi's temperature was 36 and feels like 45 degree around 12:30 pm and now it drops down to 26. Allah Pak ki Shan Masha'Allah ♥️♥️♥️ #karachirains pic.twitter.com/W1B7jnk60j

20 plus years of provincial management of @sindh and water discharge from commercial hubs such as Tariq Road can't be fixed. Peak incompetence!@BBhuttoZardari@murtazawahab1@AseefaBZ @BakhtawarBZ @PPP_Org#KarachiRains pic.twitter.com/lATEuBVl8w