Karachi supermarket fire: Who will help 170 displaced families of the 15-story building

The police have filed charges against the three brothers who owned the supermarket. 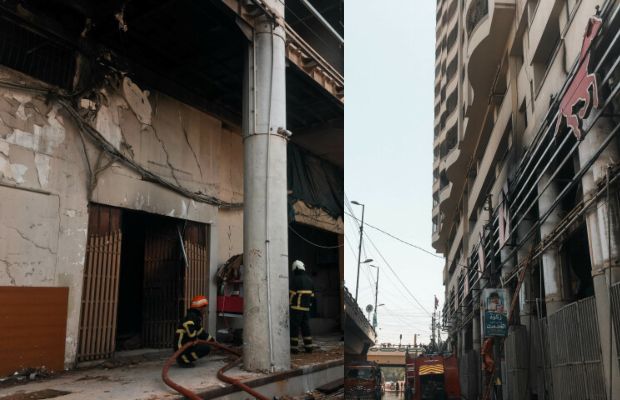 Even after two days, the fire department was unable to completely extinguish the fire in the basement of a 15-story building situated near Jail Chowrangi.

According to the officials from the fire department, the blaze is under control and the smoldering process is underway while more than 18 fire trucks are still on the site.

The supermarket fire has displaced 170 families residing in the building.

The 15-story building has been declared unsafe and is no longer suitable for living.

This means the building has to remain vacant with residents having nowhere to go.

According to one of the residents, the price of a flat in Sumya Bridge View is between 30 to 60 million rupees.

One person was killed in the fire that started on Wednesday.

Assistant Commissioner Ferozabad Asma Batool in a press briefing revealed that the cause of the fire was a short circuit.

“At 10:40 am, the fire was first reported,” she said, adding that due to the high prices of edible oil the superstore management had hoarded the commodity in the basement which spread the fire.

Parts of the building are still blazing, but the intensity is low, the assistant commissioner added.

In the latest development, the fire has spread to the parking lot.

“We are trying to get vehicles out of the facility, but the temperature has dropped from 500 to 150,” she added.

The fire that started in the basement where the superstore owners had stored cooking oil.

On the other hand, Sindh Building Control Authority has informed the Deputy Commissioner of the Eastern District in a letter that the surrounding buildings have also been evacuated.

tweet
Share on FacebookShare on TwitterShare on PinterestShare on Reddit
Saman SiddiquiJune 4, 2022
the authorSaman Siddiqui
Saman Siddiqui, A freelance journalist with a Master’s Degree in Mass Communication and MS in Peace and Conflict Studies. Associated with the media industry since 2006. Experience in various capacities including Program Host, Researcher, News Producer, Documentary Making, Voice Over, Content Writing Copy Editing, and Blogging, and currently associated with OyeYeah since 2018, working as an Editor.
All posts bySaman Siddiqui