The Supreme Court on Monday ordered the authorities to demolish the shopping Mall and the recreational club within two days. 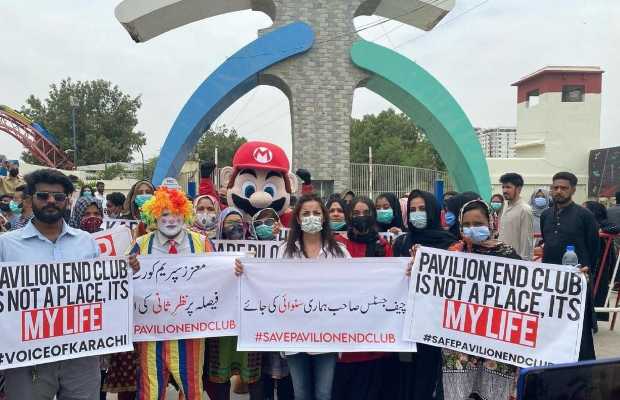 The Supreme Court on June 14th, 2021 ordered the local administration in Karachi to demolish the city’s most beloved Pavilion End Club, one of the most superlative and affordable Sports & Recreational facilities in the city; and to end “all commercial activities” (according to the Supreme Court) at Aladin Amusement Park both located on Rashid Minhas Road in Gulshan-i-Iqbal and under the aegis of A. A Joyland.

A three-judge bench observed that Aladin Park had been converted into Pavilion End Club and membership was being offered against fees along with other commercial activities. It directed the Karachi administrator to immediately demolish the club and end other commercial activities on Aladin Park’s premises and file a compliance report within two days.

A.A Joyland maintains that this land can essentially only be used for building parks and recreation spaces for the public, and Pavilion End Club exemplifies just that. It is undeniably a recreational space loved by thousands of families who spend their evenings being entertained, relaxed, and diverted by the Club’s myriad of facilities.

The Pavilion End Club remains an exemplary sports and recreation centre- the only one of its kind in District East- that offers its loyal 16,000 family members sports and social facilities with an extremely affordable membership fee, offering 40+ facilities for the whole family and catering to the residents of Gulshan, Nazimabad, Askari 4 and surrounding areas of the city. The Pavilion End Club offers facilities including a separate gymnasium for gents and ladies, 2x jogging tracks with lush green gardens, and indoor and outdoor sports like all other major clubs in Pakistan.

The low affordable costs members incur to use world-class facilities ensure easy accessibility and the physical and mental welfare of Karachi’s general public. A. A Joyland maintains that the Club has been operating for more than ten years as a legal entity with a registered lease under Sindh Act and has met all the legal requirements thus far. Terming this space as a “commercial entity” misrepresents the great service that Pavilion End Club has done in providing safe and affordable recreational facilities to the masses of the city.

In addition, Pavilion End Club employs more than 600 people, who dedicate their services to uplift the mood and experience of the visiting public and whose livelihood will be lost by the Supreme Court’s sudden decision.AA Joyland, members of the club and supportive celebrities all feel that demolishing Pavilion End Club at such short notice will cause distress to thousands of families who depend on it for their livelihood and those that depend on it for safe recreation manned by a large bevy of security guards who maintain law and order and security to keep the facility safe and secure.

The company spends a hefty amount in ensuring the safety audits are checked and all members feel completely safe and secure.  A. A Joyland has invested billions of rupees into the project (not to mention their heart and soul) to create and maintain one of the most popular and iconic recreational facilities in Pakistan. AA Joyland argue that how can safe and sound sports and recreational facility at such low prices be considered a commercial venture as decreed by the Supreme Court?

The Government has wanted to increase safe recreational spaces for the public and Pavilion End Club encapsulates this directive. In contrast, the Supreme Court’s decree to demolish it is both counterproductive and destructive.

AA Joyland appeals to the Supreme Court to review its decision and revive the rightful and legal status of Pavilion End Club. A public campaign is underway to appeal to the Supreme Court with many Pakistani celebrities taking to social media to raise their voices against this unfortunate decision against one of Karachi’s most beloved recreational facilities.

As a be grieved 10 year member of Pavilion End Club decried:
“ It is sad and tragic that the  Supreme Court finds it most urgent to demolish one of the last remaining places for middle-class folk to have an outing! First, they destroyed all the green belts in Karachi, and then gave control of all the parks to KMC under MQM. Where should people go to enjoy any quality time with their families? Does the Supreme Court have any suggestion in this regard? Any gymkhana for the common folk? Or is this country now for elites only?”

Says another member who joined the Pavilion End Club eight years ago and who is just one of a multitude of anguished members beseeching the Supreme Court to relent, echoing the sentiments of all of the Club’s be grieved members: